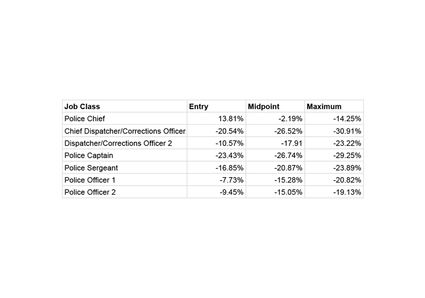 Date courtesy of the Petersburg Borough

According to a recent fiscal year 2020 compensation survey of borough staff, nearly every position within the Petersburg Police Department is underpaid at three points throughout the individual's career. The chart shows whether the pay rate for a position within the police department is above or below the average pay rate for a similar position in other municipalities around the state.

The borough assembly approved a letter of agreement with the Petersburg Municipal Employees Association at their assembly meeting on Monday that includes a two percent raise that will go into effect on July 1, 2020.

The letter of agreement extends the term of the 2017-2020 collective bargaining agreement, which was set to expire on June 30, 2020. Negotiations between the two parties to discuss a new three-year contract were to begin in April, but were postponed due to the COVID-19 pandemic.