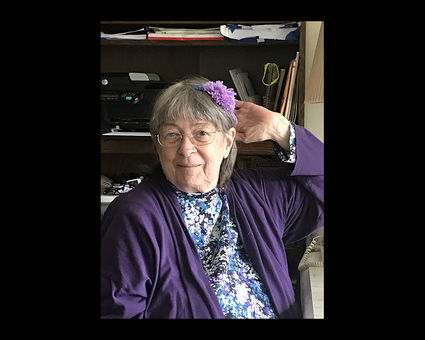 She was born on March 30, 1948 to Fern and Daniel "Pete" Rover, in Seattle, Washington. She lived mainly in the Pacific Northwest during her younger years, but the place where she spent most of her adult life was in Petersburg.

She was known as a loving person with a sense of humor and a flair for decorating some of the things and life around her, such as the panels on the entrances to some of the businesses in Petersburg's downtown area with colorful artwork featuring flowers. She and some of her friends made a trail of painted pig's feet from the airport terminal all the way to the police station and titled it, "when pigs fly." You could hear whistling when she was out and about doing things over the course of her days such grocery shopping or watering plants at Mountain View Manor (where she spent her final years.) One final very appropriate thing she did was decorate the coffin that she made for herself with the words, 'Return to Sender.'

She was employed by the Petersburg Children's Center for almost three decades, the majority of that time spent as the chief teacher for children ages four to almost six: and while working there she obtained a teaching degree.

Mickey was preceded in death by her parents Fern and Pete Rover (whom she got her sense of humor from), elder brother Mike Rover, and partner Robert "Bob" Wikan.

She was laid to rest in Petersburg. She asked not to have any celebration of life but asked that anyone that needed something like that remember her in a place that was fun for the both of you.