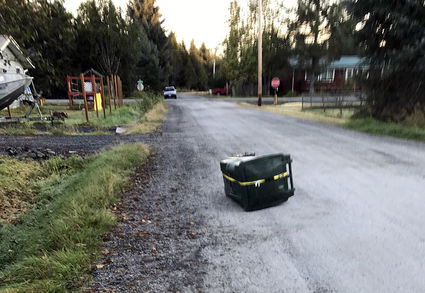 A persistent bear tried and failed to get into the Holmgrains' trash can on Sept. 15, which was strapped tightly with a ratchet strap. The bear dragged the trash can about 15 feet before it gave up on the free meal.

A mother bear and her three cubs were seen near Rae C. Stedman Elementary School on Tuesday, which put staff and teachers on high alert; however, Principal Heather Conn said in an email to parents that the students were safe throughout the day.

"I wanted to let you all know the story behind what happened as I know that for some kiddos this was a scary event," said Conn in the email. "Some it was way cool, and some had no idea it even happened."

At around 1:15 P.M. all the students were brought inside and the school went into a "shelter in place" protocol, said Conn. Free movement was allow...