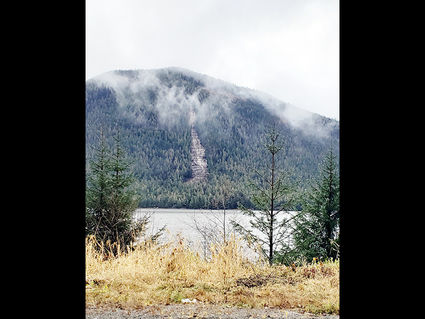 A landslide occurred on Kupreanof Island just south of marker 51 on Sunday that left a side of Tonka Mountain stripped bare of trees.

Grace Wolf heard what sounded like a jet flying over her home near the six mile mark of Mitkof Highway at about 7:30 P.M. on Sunday. She knew it had to have been a landslide, but the rain and the evening darkness blocked her view of the large landslide that occurred on Tonka Mountain on Kupreanof Island. To Wolf, it sounded like it could have occurred anywhere, even near her home.

"The hillside behind our house has been known to slide before, so it's always in the back of my mind when it starts raining heavily," said Wolf.

Well into the evening, Wolf could hear large boulders tumbling down...