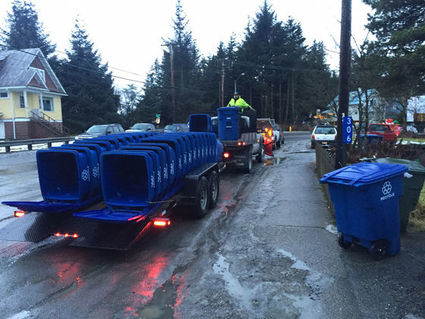 The 96-gallon recycling carts were rolled out in January, 2016.

The Borough Assembly heard a detailed presentation on a recent rate study of the Sanitation Department at their Nov. 2 meeting that showed four possible scenarios for the borough's recycling program, all of which include rate increases for the department.

Rate studies for the borough's water, wastewater and sanitation departments were conducted by FCS Group, based out of Washington, and cost a total of $42,000, according to Public Works Director Chris Cotta at an assembly meeting in August. Matt Hobson, a project manager with FCS Group, laid out the details of the rate study to the assembly...