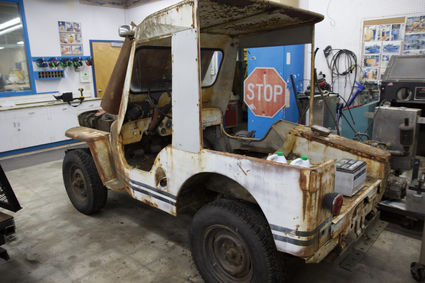 The Jeep has a high cab and plenty of room in the back.

Devon Guthrie is fascinated by cars, but never understood how they worked. Then he saw a picture of an old 1951 CJ-3A Willys Jeep sitting in a lot in Skagway. Now it sits in the Petersburg High School shop where Guthrie works to refurbish it each morning.

"I've always been interested in cars, but never been able to learn about them," said Devon. "This is one of the ways I can learn."

His dad, Alex Guthrie, also had a Jeep when he was younger. After talking to the owner of the Jeep, who was a friend of his, Alex offered to purchase it. The owner instead gave it to the father and son.