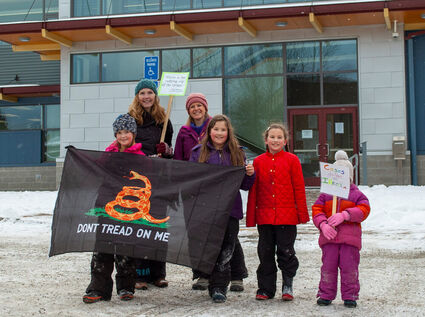 A group of residents holding flags and homemade signs gathered outside the Borough Building on Monday in support of the Borough Assembly rescinding the local mask mandate. Sarah Reid, one of the residents who attended the hour long event, estimated there were about 25 people who showed up to voice their opinions. Back row from left to right: Nancy Hoschar and Sarah Reid. Front row from left to right: Riley Reid, Julianna Gallardo, Beatriz Gallardo and Kori Reid.

A motion to terminate the local face masking mandate failed at an assembly meeting on Monday after assembly members declined to second the motion.

Assembly Taylor Norheim requested the action item be on Monday's agenda and made the motion to terminate Public Health Mandate #8. The motion failed to gain a second, which prevented a discussion and vote on terminating the mask mandate.

The mask mandate was put in place by the Borough Assembly in November and will remain in place until the assembly rescinds it. Under the mask mandate, residents have to wear a face covering in a public building...