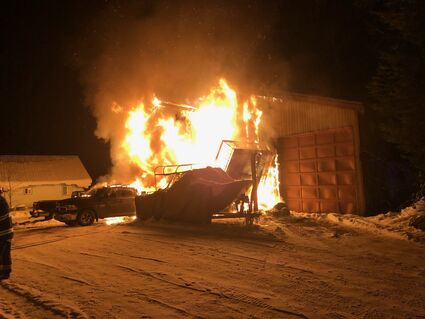 Flames erupt out of the Scow Bay Loop home as the fire engulfs the building early Tuesday morning.

A family of three awoke just before 4:45 A.M. on Feb. 16 when the smoke detectors in their home at Scow Bay Loop Rd. began going off, said Berg. They could also see flames through their living room window. None of the occupants were harmed in the fire, said Berg. The home is built on top of a garage, which is where fire officials suspect the fire originated.

Two fire engines, one ambulance and about...