Active case count jumps up to 65 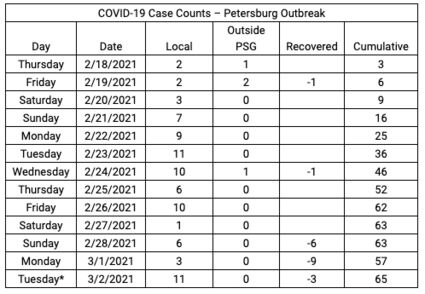 The chart above lists the current outbreak's cumulative COVID-19 case count as of 4 P.M. on Tuesday.

Eleven more active cases of COVID-19 were reported in Petersburg on Tuesday, bringing the local case count up to 65, according to a joint press release from the Petersburg Borough and Petersburg Medical Center.

In addition to the 11 cases reported on Tuesday, the Petersburg Emergency Operations Center identified one more positive case of COVID-19 for Monday's case count. One infected resident was also admitted into PMC Tuesday for treatment and monitoring, according to the press release. Three cases were identified as recovered by public health officials on Tuesday.

Petersburg had seen a decline in cases over the past few days. Only one case was reported on Saturday, six were reported Sunday and three cases were reported on Monday. During that same timeframe, 15 infected residents made a recovery. The active case count peaked at 63 on Saturday and Sunday and dropped for the first time since the local outbreak began on Monday down to 57.