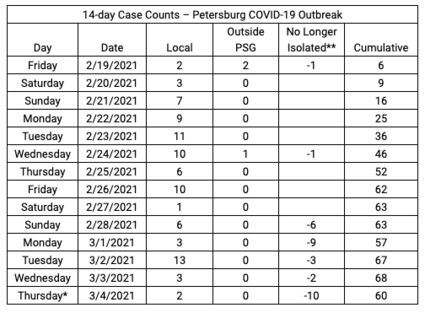 The chart above lists the current outbreak's 14-day cumulative COVID-19 case count as of 4 P.M. on Thursday. Note that infected residents are no longer being classified as recovered, but as no longer isolated when removed from the active case count.

Petersburg's active case count for COVID-19 has fallen down to 60, the lowest the case count has been since Monday, according to a joint press release from the Petersburg Borough and Petersburg Medical Center.

Two active cases were confirmed on Thursday. An additional case was added to Wednesday's overall case count, resulting in a new high of 68 active cases in the community on Wednesday, according to the press release. Ten infected residents were no longer required to isolate on Thursday, which is a shift in language used by the Petersburg Emergency Operations Center.

Formally, those 10 infected residents would have been deemed "recovered," by the EOC. According to the press release, once public health officials identify a patient as no longer needing to isolate themselves, the individual has reached the end of their infectious period and does not pose a threat of spreading the virus to others.

By changing the language from "recovered" to "no longer isolated," the EOC is clarifying that a person could still have the virus when they are released from isolation.

No infected residents are currently being treated for COVID-19 at the hospital, but PMC's home health department is providing outpatient care for over 10 residents infected with COVID-19, according to the press release.