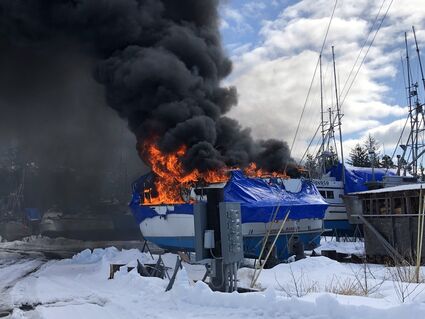 Flames and smoke rise from the F/V Nitty Gritty on Sunday, March 28.

Berg, who was one of the first responders on the scene, said he saw the F/V Nitty Gritty, owned by Denny Heimdahl of Petersburg, engulfed with smoke and flames when he arrived. Two fire engines responded to the fire, along with 10 firefighters. They quickly began dousing the flames with water, and within 15 to 20 minutes, the PVFD had extinguished the fire, said Berg.