Patrick Wilson to retire from OBI 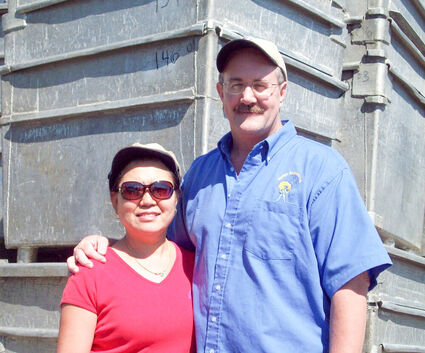 Patrick Wilson with his wife Hyo Rye Kim (Kimmie) at OBI Seafoods. The couple will be retiring this summer. Wilson has been with the company for 32 years, and Kim has been working for OBI Seafoods since 1978, which was Petersburg Fisheries at the time.

Since the fall of 1989, Patrick Wilson has been the plant manager for Icicle Seafoods, later OBI Seafoods, but this summer he'll be leaving Petersburg to enjoy a retirement split between the Bahamas and Washington state.

Originally from the greater Seattle area, Wilson got his start in the seafood business in 1975. He took a job working for Cossack Caviar in Seattle, because he heard the company sent workers to Alaska during the summers.

"I thought that was pretty exciting," said Wilson. "It sounded like a fun adventure. Most of my friends didn't think it was such a great idea though."