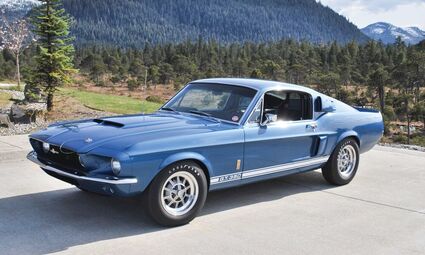 Petersburg sunshine reflects off the sleek and sporty high performance 1967 Shelby GT 350 that has been fully restored by owners Tim and Polly Koeneman.

Tim and Polly Koeneman were looking for a fun performance car, in 2003 when they decided to steer away from "traditional investments," and purchased a 1967 Shelby American GT350 from Scott Steward, Secretary/Treasurer of Auto Purchasing Agency, Inc of Pasadena, California.

Tim told the Pilot, "I have been following cars for a number of years and knew that Shelbys had kept their value well through the years since Shelby American quit producing the cars after the 1967 model year.

"The 1967 model was larger, heavier, and had a number of comfort factors that the early cars did not have. As a r...