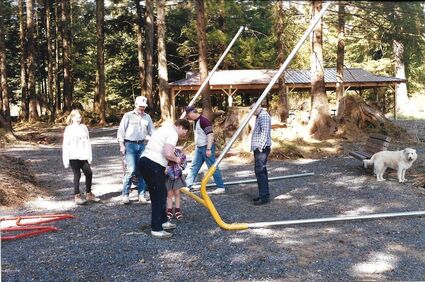 Volunteer Beth Loesch and Parks & Recreation Director Bill Musson (left) work with other volunteers from the Rotary Club to set up the swing set assembly. In 1996 the P&R department purchased the equipment and the Petersburg Rotary Club volunteered to assemble the slide, swing set and digging toy at Sandy Beach Park.

A week after the Sandy Beach Playground was installed, organizers said the playground has enhanced the park and gotten nonstop attention from the younger members of the community.

The new playground replaced a 25-year-old playground that consisted of some digging equipment, a swing set and a slide. Desi Burrell, one of three organizers of the project, said auditors recommended the replacement of the aging playground several years ago. Because the Petersburg Rotary Club had installed the original playground in May of 1996, Burrell said the organization had a duty to replace it.