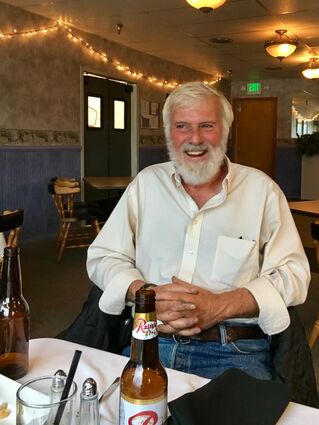 Arnold Martin Enge, a lifelong Petersburg gillnetter who plied the waters of Southeast Alaska for six decades and was a respected advocate for his fellow fishermen, died at home on Sing Lee Alley in June. He was 73.

Born into Petersburg's oldest pioneer family, Arnold followed his Norwegian ancestors' path into commercial fishing, first skippering a gillnet boat at age 17 and only pausing for a brief stint in college and a longer one in the Navy. He was the dean of the Petersburg gillnet fleet, often mentored younger fishermen, and for three decades represented Alaska on behalf of the United States, negotiating salmon treaty terms with Canada.

The oldest child of John and Carol Enge, Arnold was born in Jefferson, Iowa, on August 26, 1947. His mother, a recent transplant to Petersburg, had returned to Iowa to visit her family and give birth. John followed after the salmon season and the family drove back to the West Coast with newborn Arnold resting in a basket on the back seat.

The family lived in the tiny fishing settlement of Pelican for a few years when Arnold was small before returning to Petersburg, now with three young boys. Arnold and his brothers lived a rambunctious outdoor life, filled with fishing, hunting, and boating adventures. He was active in the Boy Scouts and ran track and played basketball for Petersburg High, where he graduated in 1966.

Arnold attended college in Idaho for a year then enlisted in the U.S. Navy as the Vietnam War ramped up and the draft loomed over young men his age. He enrolled in a six-year electronics training program and ultimately was posted on the USS Enterprise, the largest aircraft carrier in the US fleet, seeing action in the South China Sea.

Back home, he bought the FV Silvercrest and returned to gillnetting. It was the only job he ever wanted. In 1978 he married Carrie Copony, a high school English teacher from Michigan, and they started a family, raising daughters Kate and Ana on South Second Street. He had his next boat custom built on the East Coast because he liked the wide and shallow Maine lobster hull. He fished aboard the FV Moonshadow for the rest of his life.

Arnold was a key member of the Transboundary Panel of the Pacific Salmon Commission and spent many long days each year negotiating salmon treaty rights on behalf of Alaskan fishers.

He delighted in living in Petersburg, meeting friends, telling stories, talking about life on the fishing grounds and in town. Among his greatest joys was ice skating after the first fall freeze and he was frequently the first person to strap on skates at Blind Slough.

Arnold was a master of the craft of gillnetting. He taught fishing through the university for a time and loved to discuss the intricacies of the gear. He recently demonstrated a technique for attaching weighted lead line to a gillnet that he called "catch two, hang two." He said others used a different style, called the Bellingham knot, but he had evolved one that worked best for him.

Arnold is survived by daughters Kate and Ana, both of Juneau; brother Steve Enge, of Port Townsend; sisters Marilee Enge, of Berkeley, Calif., and Elisabeth Enge-Nyssen of Shoreline, Wash.; 10 nieces and nephews. And countless friends. A gathering to remember him will be held in Petersburg later in the year.