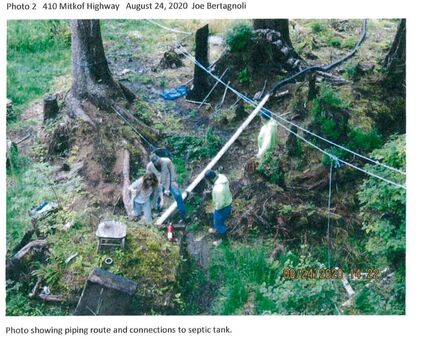 The photo above shows what borough officials say is the above ground pipe with connections to the septic tank.

It's been almost a year since the Petersburg Borough was made aware of raw sewage being dumped from a home owned by Courtney Johnson at 410 Mitkof Highway. At Tuesday's assembly meeting, assembly member Jeff Meucci asked borough officials to give a report at the next meeting on the status of the order of abatement issued last summer.

Borough Manager Steve Giesbrecht said it looks like the borough will be forced to shut the water off to the home, making in uninhabitable. First, officials will have to obtain a search warrant to go onto the property to see if sewage continues to be dumped on t...