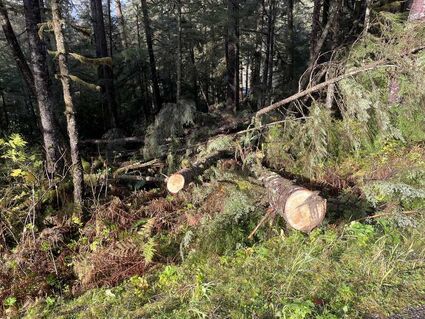 Multiple trees were removed along Mile 8 Mitkof Highway on Friday night. Line crews were out until 2 am clearing trees and restoring power from a storm that brought wind gusts of up to 70 mph.

According to a report from Utility Director Karl Hagerman it started with a tree in the line at 919 Sandy Beach Road across the street from the Bible Church.  The crew was able to clear it without damage to the power or telecom lines.  Many other trees at this location came down but they did not reach the road.

The decision was made to close the road to traffic from Sandy Beach Park to the town side of the Bible Church and public works responded with barricades.   The PD also was on site and assisted with their spotlight to keep an eye on the tall trees that were threatening to come down with every gust, according to Hagerman.

Immediately after power was restored to this circuit, the crew had a report of power out on the line out the road between mile 8 and 9 along Mitkof Highway.   Upon getting to the site, the crew was in the middle of an ongoing blow down event, with many trees coming down across the highway and near the power lines.   All PMPL personnel that were not yet called out were called and responded to assist the line crew as needed.

ADOT was also called and responded to assist with moving the large downed trees with equipment.  Hagerman said reports of trees making contact with power lines around town were investigated quickly but the main focus was in the fur farm area and by the former Alaska Fibre property.  Trees had to be removed from contact with the lines and once that was accomplished power was restored at about 10:30 p.m. Additional work was needed within some smaller subdivisions to remove trees and restring some smaller lines that had been impacted.   All work was complete and crews headed home at 2am according to Hagerman.

Hagerman added that the Crystal Lake hydro needs some troubleshooting this morning as it wouldn't come back up when needed.  Bob Ziemke and Jed Warnke were to head out this morning to get that sorted out.  "We are on 100% SEAPA power right now but will go back to using Blind Slough as soon as we can," said Hagerman. 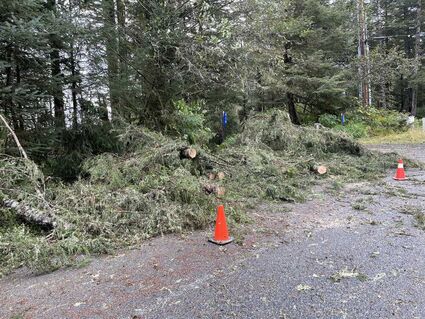 Hagerman shared his appreciation of all who assisted during the evening. "I'm so very proud of the team that responded last night.  Jed Warnke manned the control room and did an excellent job of coordinating our efforts with Tyee and handling all the radio traffic from the crews in the field.  Kevin Hess, Adam Day and David Mazzella were outstanding in their efforts to work through the numerous trouble spots on the line in the very worst of conditions.  Bob Ziemke and Alice Williams responded and provided valuable ground crew work and aided in the restoration process.  Martin Odegaard and Jarred Pilcher were an amazing amount of help to the crew and did all they could to support the effort under hazardous conditions.   Barry Youngberg with ADOT responded without question when called and did excellent work.

"The police department officer (Johnny Pickle) and dispatcher (Alex Mellis) on duty were superb in their support of the efforts of the crews in the field and helped to keep the crew safe and notify the community of the hazards of the storm.   The fire department also responded to aid in blocking off the road during the first issue at Sandy Beach Road (John Fortna) and also for the reports of trees sparking on power lines as the storm progressed (Chief Stolpe, David Berg, and a full volunteer crew)."