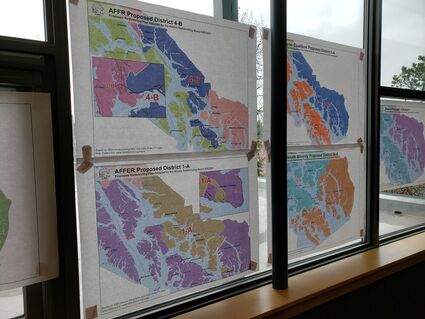 Maps courtesy of the Alaska Redistricting Board

The Borough Assembly walked through each of the six maps being considered by the Alaska Redistricting Board during Tuesday's meeting and discussed each map's affects on Petersburg.

The districts are redrawn every decade based off data collected by the U.S. Census Bureau. Each of the 40 districts must be socioeconomically integrated, reasonably compact, contiguous, and have an approximately equal number of people. This year that number is 18,335 per district.

Members from the Alaska Redistricting Board visited Petersburg on October 7 to present the six proposed maps to the community and rece...