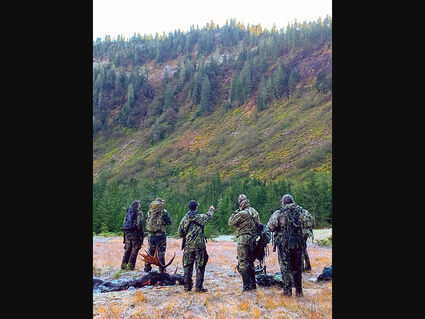 Kent Mccollum, pictured center, bagged a large bull moose high up the Leconte Overlook on Mitkof Island. A hardy group of friends joined him on Saturday morning to hike the mountain and help pack out the meat.

The moose harvest closed Friday with a final count of 129 moose according to Hilary Wood of the Alaska Department of Fish and Game.

The total count, including illegal moose, was a four-year high, beating 2019's total by two.

The number of moose harvested on Kupreanof Island, including the area around Kake, was higher than the previous three seasons, totaling 61, six of which were illegal.