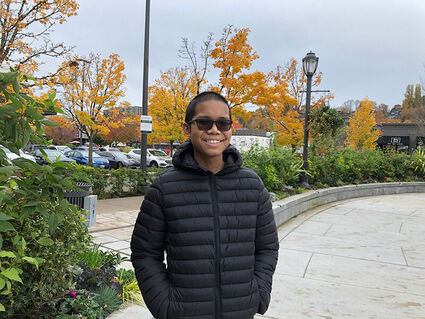 Joseph Tagaban smiles outside as he continues his recovery.

After months away from family and friends, Joseph Tagaban hopes to return home to Petersburg in time for Thanksgiving.

Joseph was checked into Seattle Children's hospital in January after it was discovered that a lump underneath his tooth was a type of cancer called acute myeloid leukemia (AML).

So far he has gone through four rounds of chemotherapy and is now finishing his recovery from the fourth round. He was also taking an experimental drug called gilteritinib but is now off of it and is awaiting more tests including an MRI and CT scans on his chest and his brain before he will be able to come home.

"Everything's always up in the air, you never know, you can't plan for anything," Ed Tagaban, Joseph's father, said.

Joseph recently had his fourth bone marrow test which came back negative and since the cancer is in remission, doctors decided he could be finished with treatment.

They originally planned to do five rounds of chemotherapy, but decided not to because the dosage would have been tripled and Joseph has suffered from prolonged infections after his previous treatments.

"He had a lot of infections and that last stint in the fourth round was 109 days in the hospital straight," Ed said.

In comparison, other children who also had AML only were in the hospital for 30 to 40 days.

Over this past year, Joseph has adjusted to his new normal in the hospital. COVID-19 has impacted his ability to receive visitors at the hospital, but his parents Ed and Je Tagaban are able to visit him. Je has stayed in Seattle through his recovery and had to leave her position at GCI earlier this year to do so.

He plays games online with friends, reads, and FaceTimes with loved ones to stay connected and pass the time.

Je will accompany him along his walks through the hospital. He usually walks 10 laps around his wing of the hospital, which is about a mile, but on days where he is feeling well he will walk more.

Joseph has also become somewhat of a celebrity at the hospital and Je said the nurses get excited when they find out that Joseph is their patient for the day.

"It's just so cool. He's got a good reputation with them with his attitude," Je said. "One of the nurses said, 'Joe, I know you want to get out of here, but then people will be missing you.'"

He also still attends school virtually and is adamant about staying on pace with other students despite his circumstances which has inspired his doctors. Joseph told his mom that he did not want to be treated differently from the other students and does his best to stay on top of things.

"Even though he has headaches, he would taking morphine and oxycodone just to manage the pain so he could just continue his schooling," Je said.

Though he is far from home, he has been constantly reminded of the love and support he has received from the community of Petersburg. He is still receiving letters, cards, and care packages and Je said the good messages never seem to stop.

"People have just been continually outpouring on him, the Joseph Strong has been alive pretty well," Ed said. "It was a lot in the beginning but it's still maintained itself though the whole ordeal here."

Good results from these lasts tests would mean Joseph could be back in Petersburg by Thanksgiving, which Je believes is a fitting holiday to celebrate his return.

"This is a big reason to celebrate because Joseph is cancer free, and we'll be home by then and it's really worth celebrating Thanksgiving and Christmas," Je said.

"I'm just thankful for everybody," Ed said. "It's interesting the people that you meet along the way that God will place in your path to help you get through this, it's been phenomenal, people we've met and helped us through this."