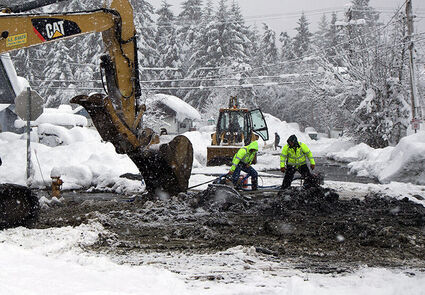 Borough crews used an excavator and pumps to try to uncover the source of the rushing water.

Petersburg residents took up shovels, flashlights, and rain boots Tuesday in a day that saw freshly fallen snow followed by a power outage and a broken water main flooding the streets of town.

8.5 inches of snow fell Tuesday, setting a new record for most snowfall on December 21 of any year.

So far, Petersburg has accumulated a total of 74.3 inches of snow this winter according to the National Weather Service, well above the average for this point in the season of 21.3 inches.

While people outside were dealing with the snow, the people still inside soon faced another challenge.

Around 10 a.m., Petersburg experienced a power outage after SEAPA switched out a reactor in Wrangell according to SEAPA Engineering Director Robert Seidman.

The switch was made in preparation of cold temperatures later this week and would allow Tyee Lake to provide more power to Petersburg and Wrangell.

Though the cause of the line outage is unknown, Seidman wrote that it could have been a potential overvoltage condition or a new reactor switch issue.

Utility Director Karl Hagerman wrote that local peak electrical loads could eclipse SEAPA's available power during the winter, which was one of the drivers behind the Scow Bay Standby Diesel Generation project, and that PMPL and Wrangell Light and Power are working together to provide diesel generation support if that happens.

"It is important for the community to know that any efforts that reduce the initial electrical load on our system following a cold weather power outage is very much appreciated," Hagerman wrote. " In the event of an outage in extreme cold weather, PMPL will be bringing the community back online in as small of sections as possible to make sure that loads can be picked up with diesels and that we don't overload our units and put everyone back in the dark."

He also asked residents to unplug additional heat sources during power outages to help reduce initial load on the generators and wrote that heating appliances can be turned back on approximately 15 minutes after power has been restored.

Though power was restored around 11 a.m., another issue immediately required the attention of the borough.

An eight-inch water distribution valve at the intersection of South 4th Street and Ira II Street failed due to corrosion on the valve body according to Hagerman.

The pipe broke open allowing water to flow through the frozen street near the valve and continue along the road and down Haugen Drive.

Borough crews including people from Public Works, Water Department, and Wastewater Department used an excavator to break through the frozen road surfacing to locate the valves to shut off the water and used pumps and opened a fire hydrant to try and clear water from the hole.

Hagerman wrote that PMPL, the Police Department, and the State Troopers blocked off roads and worked to open up storm drain inlets.

The rushing waters began to pool outside of Humanity In Progress' rental space which was ankle deep in water by noon according to Ashley Kawashima.

She and other members of the community spent the next five hours continuously shoveling water which had risen to five inches inside some parts of the building.

Later they tried to get everything that was wet and damaged out of the space and began to use dehumidifiers and fans to try to pull moisture out of the walls.

"For HIP, we lost quite a bit of food and gear, unfortunately. We have been collecting lots of stuff for our Project Connect event for the community happening in January for those experiencing housing insecurity and had just got in a big food order for our free food bag program and we definitely weren't able to salvage some of those things," Kawashima wrote.

The broken water main drew Public Works crews away from their unfinished plow routes according to Public Works Director Chris Cotta, who wrote that two Sanitation Department staff began plowing in their place and finished around 6:30 p.m.

Hagerman wrote that repairs to the water main began around 4:20 p.m. when the water was shut off and by 7:45 p.m. all customers had access restored to water from borough mains.

Public Works then backfilled the hole and left the site around 10 p.m and the street crew that had stayed helping with the repair of the main returned to work at 3:30 a.m. Wednesday morning to plow and clean the streets according to Cotta.

Hagerman received reports that morning that some residents in trailers near the valve did not have water. Borough staff began trying to determine the issue and at that point suspected that the water lines were frozen.

Volunteers also arrived at HIP Wednesday morning to transport items to the Mitkof Dance Troupe building for storage while the damage is assessed according to Kawashima. 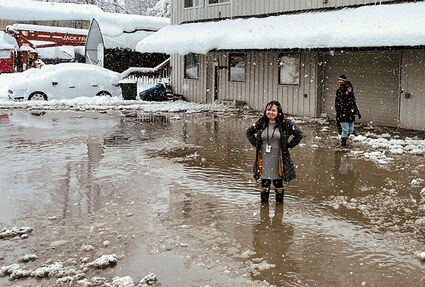 Ashley Kawashima stands in water pooling outside Humanity In Progress.

"We've had a couple people in and out today cleaning and checking dehumidifiers and doing loads of laundry for us and it's been really amazing and we've already had others reach out to offer help or donations to replace things we have lost," Kawashima wrote Wednesday. "Our slogan for Humanity In Progress (HIP) is it's HIP to be kind and our community is really proving that to us."

The landlords of the building will be coming back to Petersburg soon to examine the extent of the damage to other spaces in the building.

"Fortunately we don't get days like that very often-but it's nice to know that when we do, our Borough staff and others within the community are willing to step up and work together to get the job done and keep our town running," Cotta wrote.