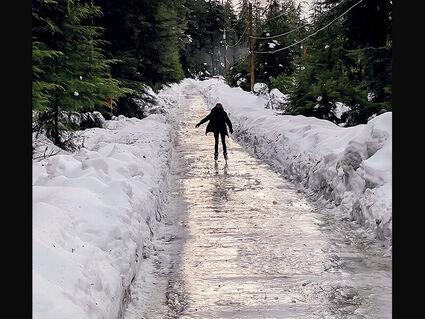 Paige Hansen ice skates down an access road near 8 mile after the weekend's rainfall turned snow packed road surfaces into sheets of ice.

Southeast Alaska was covered in a fresh layer of snow last weekend followed by rainfall which caused frozen roads, flooding, and damage to buildings across the region.

3 to 13 inches and wind gusts up to 45 mph for cities in Southeast including Petersburg, Wrangell, and Ketchikan.

Petersburg recorded 7.5 inches of snowfall on Saturday which brought the total snow depth to 36 inches according to the National Weather Service in Juneau.

The next three days saw 1.83 inches of precipitation on Sunday, 0.98 inches on Monday, and 0.29 inches on Tuesday causing roads to ice over.

The Petersburg Borough's Facebook announced Monday morning that most borough facilities not involved with storm recovery and emergency building maintenance would be closed for the day.

Some people who lived outside of town had trouble getting to town because of ice on the roads including some Parks and Recreation staff.

The Parks and Recreation facilities were closed on Monday and an announcement on their Facebook page stated that some of their staff were also out due to illness and snow or ice related injuries and that there was also a small issue with water collection.

While many borough buildings were closed, the Petersburg Medical Center announced Monday that their services would remain open but may be converted to over the phone or telehealth.

The district announced Friday that students at Mitkof Middle School and Petersburg High School would be released at 12:15 p.m. that day because of concerns of the snow loads on the roof.

On Sunday the district announced that all schools would be doing remote learning on Monday because of road conditions being dangerous for drivers and to give them time to assess leaks within the buildings.

The schools returned to in-person learning on Tuesday as borough crews continued to sand roads to make them more traversable but allowed absences attributed to road conditions to be excused.

As of Tuesday morning there was no major damage to borough buildings according to Borough Manager Steve Giesbrecht who wrote that there were a few small leaks and localized flooding which the borough dealt with successfully.

He wrote the borough had used lots of overtime and some contracted work to manage the situation and that they are running low on sand though Public Works Director Chris Cotta is trying to get more.

Giesbrecht hopes that the weather stays warm so that the roads can unthaw and that temperatures do not get cold enough to refreeze the roads overnight and he also thanked the U.S. Coast Guard, local contractors, and borough departments who helped with snow removal and road issues. 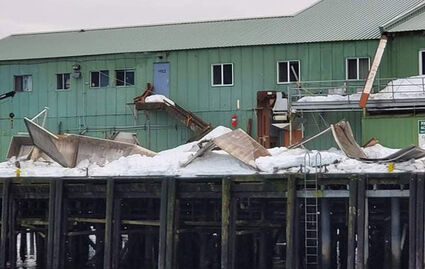 Part of the covered area along the water side of Ocean Beauty's seafood processing plant was brought down following Saturday's storm.

Harbormaster Glo Wollen wrote that it has been all hands on deck, including lots of overtime work, to stay ahead of the weather but that damage at the harbor has been minimal.

During the Petersburg Borough Assembly meeting on January 3, the assembly discussed a possible need for an emergency declaration if the weather caused major damage and while it was not needed for Petersburg, other communities were not so lucky.

According to a press release from the Alaska Department of Military and Veterans Affairs, the City and Borough of Yakutat submitted a declaration of local disaster emergency to the state on Tuesday as a result of heavy snow and rainfall.