Getting to know Humanity in Progress 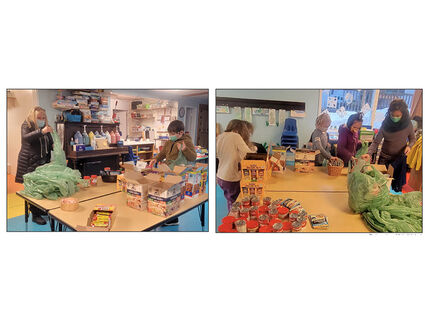 Kinder Skog provides a drop off location for Humanity in Progress (HIP) donations at the Good Beginnings Preschool. As part of a new program called HiP Kids, the Kinder Skog participants, or "skoggies," get involved as volunteers helping assemble the food bags which HIP distributes in Petersburg to those experiencing housing insecurity or other forms of need.

Having tough conversations at work is part of what Ashley Kawashima signed up for when she became a behavioral health clinician at the local hospital. But some of the hardest days come when she has to be honest with a person, looking to her for assistance, about the limited number of resources available. Just imagine, someone seeking shelter and all Kawashima can offer them is a tarp or tent.

"That can be very soul-crushing," she says. "And that was a big part of why we wanted to start Humanity in Progress."

In early 2020, the time was right, and the motivation was there for Kawashima and four other likeminded individuals (Annette Bennett, Patrick Sessa, Cortney Hess and Scott Bert) to start Humanity in Progress (HIP). She says, they were all working in agencies dedicated to connecting people with necessary resources, but often felt like their hands were tied. Many times, the individual needing help walked away empty-handed, because they didn't fall into a certain category or demographic.

"So we just decided, hey, let's start a non-profit," she says. "You just need to say that you need help, and we'll try and figure out a way to help you."

Kawashima calls HIP a work in progress, and that's a big reason why she likes the name. But, even as a work in progress, this is a serious non-profit organization focused on public education. And they are here to make sure community members understand Petersburg is no exception when it comes to residents being hungry or homeless. So, everyone should be spreading the word around town that-It's HIP to be kind.

Especially this upcoming week, because HIP will be handing out donated clothing at the 5th Annual Project Connect Resource Fair, to be held on Wednesday, Jan. 26. The event will be at the John Hanson Hall, from 2 p.m. to 6 p.m. The last hour is open to the entire community, so anyone can stop by, look around, meet volunteers and ask questions. But the rest of Project Connect belongs to participants.

One of the most crucial aspects of local participation in the event is collecting the "Point in Time Count" which comes from a quick survey. It's a nationwide program and the three criteria it focuses on are: housing insecure, couch surfing and homeless. The survey stays away from diving deep into personal information, it is a couple questions, and it is optional. No one would ever be refused services for declining to take the survey, Kawashima says.

At the first Project Connect, three people took it, and last year there were over a hundred residents that participated. Petersburg is also one of the only communities in Southeast to continuously report its survey data and this is something to be proud of, she says.

In 2021, this island was one of the only places where the questionnaire reached participants, with many other events nationwide being canceled due to COVID-19. For Kawashima and other local volunteers, recording the data was too important. Strict mitigation plans were followed, and they moved forward in order to recognize those needing help, especially since there had been a spike in people facing food insecurities at the time.

Kawashima says, having a database to draw from, built with the information collected in the survey will help local, state, and federal agencies across the board. It is her understanding that communities with strong reporting history could receive priority if HUD or other funding related to Project Connect becomes available. If that were to happen, HIP could possibly look into building low-income housing, maybe even think about doing a tiny-house project or rent supplement programs, she says.

Another serious issue facing HIP is helping define what qualifies a person as living with housing insecurities. Sounds like an easy question, right? But Kawashima has a lot of conversations around town on the topic and people are shocked to realize living paycheck to paycheck qualifies.

These people say, "they have always been fine" or "things have always worked out," but the truth is an unexpected expense could seriously jeopardize their stability. And that combined with limited housing options and having to buy expensive groceries presents a risky proposition for many on Mitkof Island, Kawashima says.

HIP treasurer Annette Bennett knows all too well that quite a few people here are currently living in places that aren't meant for habitation. And yes, there are some living in cars. But you could say, the people in cars are considered fortunate, compared to those with only a tent or make-shift shelter, especially when winter comes.

Bennett says, those living outdoors exposed to the elements find ways to get inside, and often times it means couch surfing. Unfortunately, a comfy couch to crash on can sometimes lead to an entirely new brand of unintended consequences, in the form of having to choose whether or not to trade sexual favors for a roof over one's head.

"We get reports of that," Bennett says. "Someone might offer someone a place to stay to get out of the yucky weather, but you only get to stay there if-this and that."

She says, it can be easy to fall into the trap of just thinking a person is homeless because they made poor decisions or they are just a "druggie." This is where educating the community is really important to Bennett and HIP volunteers that stress showing a little empathy for your fellow human beings.

"Sometimes you're just in a bad situation and you don't have a place to live," she says. "That doesn't mean you're not a good person or a failure in any way."

Shifting gears from housing to hungry stomachs is something HIP is getting used to, but it definitely isn't a perfect system. In addition to their clothing drives, the organization also distributes an average of 500 bags of donated food each month, and there is need for more. HIP is limited to only taking in shelf-stable items and this means more preservatives, Bennett says.

The non-profit's goal is to offer things that can be prepared without a kitchen, but this can result in less healthy options. Many of these are individually wrapped snack items, which are preferred by HIP, and that means increased waste. Again, not the most ideal situation, but making sure hungry kids and adults have something to put in their stomachs is what's important, Bennett says.

The kiddos or "Skoggies" at Kinder Skog have also joined the HIP team by volunteering to fill food bags with the donated items. Kinder Skog director Katie Holmlund, offered to help HIP by filling bags, in addition to being a donation drop-off spot for Project Connect. This supporting role is called-HiP Kids.

"This is an easy project for kids to take part in," Holmlund wrote in an email to the Pilot. "Program staff also love supporting this cause because it shows kids that it is okay to ask for help and those offering are doing so from a place of love and kindness."

HiP Kids is a service project supported by the Alaska Community Foundation and has funding to keep doing what they're doing until June of this year. If you'd like to help, all you have to do is save your plastic bags and then drop them off. For Holmlund and the Kinder Skog staff, Becca Madsen and Rikki McKay, it's all about increasing the kids' connection with community and building awareness of local basic need issues.

"I hope we are teaching kids that you are never too young to help out," she says. "And that little acts of service, when done with a big heart, will make a huge difference."