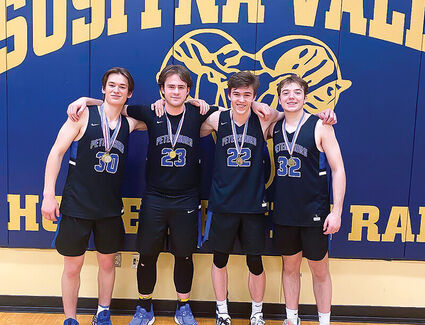 Four Vikings were named to the Su Valley all-tournament team after winning all three of their games. From left to right: Latham Johnson, Kyle Biggers, Michael Durkin, and Jack Engell.

The Vikings won all three of their games in a tournament that they almost did not make it to after the team's flight from Petersburg last Wednesday was delayed.

They flew out later that day, but by the time they reached Juneau their connecting flight had already left. After spending the night in the capital, the team arrived in Anchorage on Thursday and drove to Talkeetna.

The tournament saw the six teams broken up in...