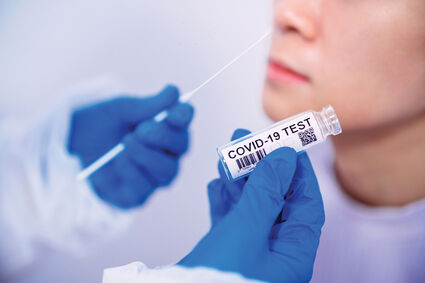 The borough's contract with the State of Alaska to provide funding for COVID-19 travel testing expired at the beginning of February. But, for now, the Petersburg Medical Center plans to continue free testing for travelers arriving to Petersburg according to PMC CEO Phil Hofstetter.

The state allowed PMC to purchase antigen test kits with the remaining funds before the contract expired which Hofstetter said will be made available to travelers.

PMC ordered 80 boxes of kits which contain 48 tests each for a total of 3,840 tests which he believes could last Petersburg at least another month.

Hofstetter also said the volume of people getting tested through the airport testing program is low so PMC believes they could potentially maintain the program without a major cost impact.

"The problem will be if we need to scale up our testing or if there's more demand. Then we'll have to reassess on whether we ask the assembly for more funding for those resources or we have to implement a charge," Hofstetter said. "At this time, we're trying very, very hard to not extend a charge or a cost to the community for that testing."

PMC did make one change to testing to hopefully reduce costs which was to do in-house testing as opposed to send out testing.

Hofstetter said they may have to ask the assembly for cost support for Cepheid cartridges if case numbers rise and that tests may have to be sent to the state lab, at which point there will be longer turnaround times, if volumes increase or if the hospital does not have enough supply.

Though a specific volume limit has not yet been determined, Hofstetter believes if the demand for travel testing doubles or triples then the program will have to be reassessed.

If someone traveling is required to have a PCR test, those are still available on a scheduled basis and more information can be found on PMC's updated website according to Hofstetter.

The highly infectious omicron variant has also led to an increase in popularity of at-home antigen tests which are available for free across the community.

Though there is some uncertainty with how the variant will impact Petersburg.

"It's still yet to be determined if we're going to get the wave here in the next week or so or what's going to happen with that," Hofstetter said. "Judging by history, I would expect the way the cases are ticking up in Ketchikan and Wrangell and Sitka that we're probably a week or two behind, so we'll see."

Borough Manager Steve Giesbrecht also wrote, "The assembly, as of today, has not chosen to fund additional testing of airport travelers. The hospital has continued to support a limited testing schedule for travelers, but most funding for the program has expired."