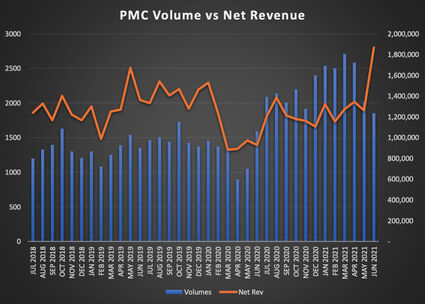 This chart displays volumes experienced by PMC compared to net revenue from July 2018 to June 2021.

The Petersburg Medical Center Hospital Board discussed the hospital's current staffing situation and turnover as the COVID-19 pandemic continues to affect its operations during its meeting on January 27.

The meeting packet featured a report provided by Human Resources Director Cynthia Newman which included a list of new hires, terminations, and the numbers of other employee statuses at the hospital in 2021.

During the previous year, PMC welcomed 26 new employees but had 37 terminations.

The hospital finished the year with 17 positions open according to the report.

PMC CEO Phil Hofstetter said the last two years have been "enormously difficult" which has led to challenges with turnover in the healthcare industry as a whole but that he is hopeful it will improve.

"I know the other businesses around town, they're all running into a problem getting people to work also," Board President Jerod Cook said.

"We have our own set of challenges and issues that are causing people to leave but at the same time each business in the community is struggling with the same problem of getting people to work."

Infection Prevention and Quality Manager Liz Bacom reported that by the end of 2021 the predominant COVID-19 variant in Alaska was the omicron variant.

Though omicron has impacted other cities in the state, Petersburg has not yet seen a dramatic increase in cases.

Bacom reported that positive cases in late December 2021 and January 2022 have not required hospitalizations and that PMC has only had to administer a few monoclonal antibodies.

However, due to the community's increased use of at-home antigen tests, where positive results are only reported to the hospital if a person who tests positive chooses to do so meaning, the true number of COVID-19 cases is unknown.

According to Bacom's report, PMC anticipates that for every positive case reported there may be an additional three to seven

positive cases of COVID-19 that are not reported or are unknown.

"Omicron is very transmissible, very easy to catch, goes through households and small groups very quickly, and so what we're hoping is it will go through and burn out," Bacom said.

She also reported that the CDC dropping the length of isolation from 10 days to five days has also meant that people are disappearing from the dashboard quicker.

During Hofstetter's executive summary, he presented a chart displaying the volume of activity compared to the hospital's net revenue from July 2018 to June 2021 which he hoped would portray COVID-19's continued impact on PMC.

"One of the things we mentioned was we were seeing this huge increase in volumes and activity within the organization, but we were not getting the revenue to support a growth of that kind," Hofstetter said.

"For example, if we were in normal times, if we were doing all these activities, we would see a nice line that goes and mirrors volumes and revenue stream that captures the same trends."

As a monthly average, net revenue remained above volumes until March 2020 when it fell as the pandemic began impacting the United States, and in June 2020 volumes surpassed net revenue.

With the added stresses of the pandemic, Hofstetter said that turnover is going to continue as people decide to retire or transition while others come into the organization from outside.

"Hopefully we'll get through the omicron, there won't be another variant and we'll kind of hit the endemic stage of a pandemic and we'll kind of have to really regroup and get into our patterns of where we need to focus our staffing, where we need to focus and improve our quality of care, and get access to patients, and improve some of our processes and there will be some growing pains with that and those growing pains will be turnover," Hofstetter said.