Lady Vikings drop two at home to the Miss Chiefs 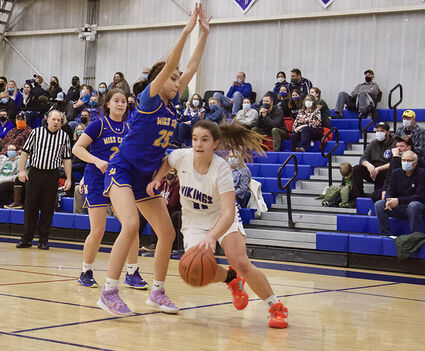 Ines Larson powers through the Miss Chiefs as she zeroes in on the basket Saturday night.

The Lady Vikings took on conference opponents Metlakatla in front of a packed house in their first home games of the season last weekend.

Though Petersburg lost both games, Head Coach Dino Brock said there were some positives including improved blocking and rebounding which his team was able to take away from the matchups.

"It was just kind of a game of swings both nights, but I thought that we battled," Brock said. "I really liked our effort and we talked a lot about trying to play the right way and we were really trying to do that and so I was really happy with that."