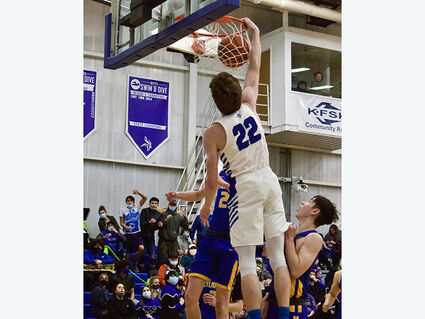 Michael Durkin throws the hammer down to put the Vikings up 28-26 in the fourth quarter during Saturday's win over the Metlakatla Chiefs.

It was a tough two games for the Vikings as they battled their conference opponent, but Head Coach Rick Brock said the games gave the team a lot to learn from.

"We've kind of figured out how we want to play. Now we need to do that every possession in practice and in the games, and it's a work in progress," Brock said.

The Vikings got off to a strong start against the Chiefs in their first game but a late push by th...