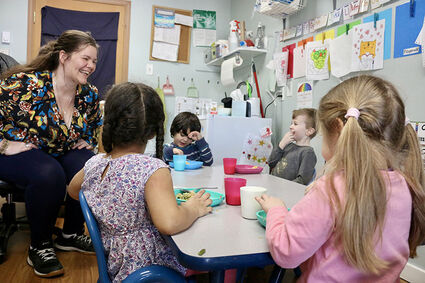 PCC director Sharlay Mamoe receives a salary, but she's used to wearing multiple hats and working way over 40 hours per week. Mamoe, far left, was overseeing a lunch of fried rice and green grapes in Miss Jessica's class on Wednesday, because the longtime lead teacher couldn't make it to work.

There were multiple accounts with outstanding balances when Sharlay Mamoe took over as director of the Petersburg Children's Center. A board member suggested writing letters to the people. Payments began coming back almost immediately, often with apologies. Those balances attest to the difficulty families face when it comes to paying for childcare.

If a couple or a single parent cannot afford the rates at PCC, Mamoe will grab an application for the state-funded Child Care Assistance Program (CCAP) and be ready to help. She'll even fax it in upon completion.

Childcare providers must be approved and licensed to receive these assistance funds. And the eligibility of parents is based on gross monthly household income. This is a copay, so it doesn't cover everything but it helps local folks, Mamoe says.

The requirements are pretty cut and dry: have a job or be actively receiving training or an education, have a child younger than 13, and have a licensed program picked out.

Mamoe understands how seasonal employment can create additionally tough times during winter months and says the most important thing is to keep in contact with the center.

"If parents are having a hard time making ends meet, then, we try to sit down with the families and let them know that we are not out to get them," Mamoe says. "We are not going to try and end care or kick them out because they cannot pay their bill."

PCC receives monthly financial support aimed at improving community development through BLOCK grants. These are based on attendance, but Mamoe says, the highest amount she's ever seen for a grant was $2,000. And, while everything helps, that just doesn't go very far.

The center foots the bill for food upfront. Federal funding reimburses three-quarters of that, because the meals are nutritious. Utilities cost for warmer months can dip down to three hundred bucks, but during winter the number rises to $600-$700. The center recently changed out all the old halogen "super sucker" lights to LEDs in hopes of lowering those figures. Again, everything helps.

In a perfect world Mamoe would be starting pay for childcare providers at $20/hr. But as it currently stand that wouldn't happen without raising rates on parents. PCC charges parents based off a state market rate survey and the center does everything it can to charge the minimum.

These days, the budget at PCC is so razor-thin, Mamoe has been paying for craft supplies-like feathers, glue sticks and paint-out of her own pocket. Mamoe thinks that to pay child care providers what they're worth and keep the cost affordable to families, subsidy is needed from the local, state or federal government.

Answering the riddle of how to pay childcare workers appropriately and still make it affordable for parents is a priority for the SHARE Coalition. And coalition member Julie Walker believes raising rates on parents would make more people stay home and not work.

Walker is also the PCC board president, in addition to working on the Community Wellness team at the local hospital. Her team member there is Becky Turland who knows all about what it takes to make ends meet.

Turland has seven years of experience being a single-mother of three children. When she got divorced she was employed at the Manor, waiting tables at the Elks, and teaching CPR. Yet, money stayed tight even after transitioning to a better paying main job at Petersburg Mental Health Services.

State assistance wasn't enough to cover childcare expenses and Turland felt like she had bills coming at her from every direction.

Turland says, she carried a past due balance after her children left PCC. She felt so bad she joined the board and worked off her debt by helping staff with CPR certification courses. The struggle led to times of feeling blue or burnt out, but she powered through and it paid off for her kids.

"It helped prepare them for going into the school system, so I have no regrets," Turland says. "It was definitely worth the nightmare and the headache of constantly working."

Now, Turland also spends time with Walker on the SHARE Coalition's Early Childhood subgroup. Turland would love to see childcare providers receive better pay and more recognition in the community because it benefits everyone.

"If kids cannot go to school or a place to be taken care of, then we don't have employees to work at all the positions and jobs around town," Turland says. "I really hope we've got the ball moving and we can make some progress."

Rikki McKay is a mentor at Kinder Skog and she's also a parent in need of childcare. Her family utilized the 2021 American Rescue Plan Act and received tax credit that allowed her to keep working.

"The credit isn't enough to pay for child care if you only have one child, though," she says. "It worked for us because we had three qualifying dependents and only one of them needs childcare."

If it weren't for the tax credit, after childcare is deducted from her wages, she makes roughly $250 a month-before taxes. So, once she pays taxes and purchases the necessary gear for her job-she ends up costing her family money-if she works. Unfortunately, as of right now, there are no plans to extend that tax credit program into 2022.

"We qualify for childcare assistance at the moment, but we are at such a high copay amount that the benefit ends up being less than $50 a month," McKay says. "That means every little expense matters."

Funds designed to help childcare centers have kept a lot of families like hers employed. But, like most emergency funding, it isn't long term or guaranteed. McKay says, this is an "everyone issue" for the community and doesn't like the false narrative that people having trouble making ends meet are "looking for a handout."

"When your kiddos are little, you are often just cobbling solutions together a few months at a time," she says. "Knowing that at any moment, the bottom might fall out."

Some families use state assistance at Good Beginnings preschool and Kinder Skog after school programs. But according to director Katie Holmlund, many grandparents pay for their grandchildren's tuition to ease the burden placed on parents.

But, same as Mamoe at PCC, if a family is having difficult times Holmlund wants families to feel comfortable letting her know, because there are ways to help. Grant funding has allowed some families short term relief in the form of child care credits.

"I work very hard to ensure that childcare and quality out of school time programs are not a privilege that only some can afford," Holmlund says.

The Board of Directors also recently approved completely free tuition for the remainder of the school year at Good Beginnings. Rates at Kinder Skog were also cut in half this semester. Grant funding from the Alaska Community Foundation and Petersburg Community Foundation helped make this possible.

Holmlund goes after grants because she understands families are often the sole source of income for a child care provider and believes the current system is built without much empathy for them when they fall on hard times. That's why she's glad the SHARE Coalition Early Childcare Group is having "wonderfully exciting conversations" about solutions and other models that may work in Petersburg.

"For the first time since I have been working in childcare I can feel like a change is coming, at least locally," Holmlund says. 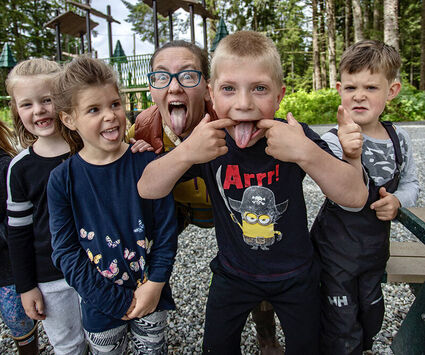 Katie Holmlund (center) takes the money parents pay for child care seriously, even though she isn't afraid to be silly at work with the kiddos. She is director of Good Beginnings preschool and Kinder Skog after school, and both programs are currently operating with discounted tuition.

Tlingit & Haida Head Start is a free option for any family that qualifies financially and desires all day preschool for their 3 to 5 year olds. All children are welcome. Head Start is federally funded and receives additional funding from the State Department of Education & Early Development.

Director Christa Green says, the local program is currently serving a dozen families, which means they do have open spots currently available. A paper application can be completed or it can be done online, and there are specialists available to help families over the phone or by Zoom meeting.

Another cool thing about this program is the family-style meals children enjoy. That and individualized learning experiences prepare them for the next level of schooling, but a huge focus of Tlingit & Haida Head Start is making sure efforts benefit everyone.

"Families need care and educational opportunities for their children while they return to the workforce or back to school to pursue their own higher education," Green says. "Childcare is expensive and this service eases the stress on families."