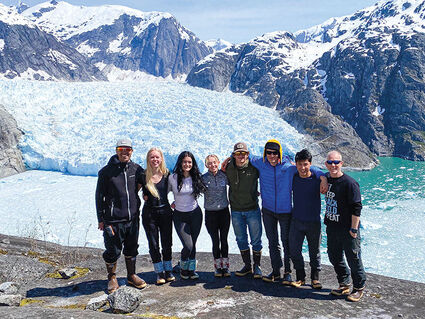 While most high schools may take a field trip to the local museum or zoo, a select group of Petersburg High School students get to go somewhere a little bit cooler-LeConte Glacier.

Each year, students set out to survey the glacier and record how it has moved over time. They're taking what they have learned in the classroom and are applying it in the field.

The survey began in 1983 with high school teacher Paul Bowen's surveying class as an opportunity for the top students to get real world surveying experience.

Science teacher Victor Trautman became involved in the program in the early 1990s and retired as the project's coordinator in 2019 which was when Tom Thompson, a math teacher at the high school, took the reins.

"It's such a great experience to get out there on the glacier, but I've been doing it for a couple of years more from the math side because that was where my background was than from glaciology side," Thompson said.

The popularity of the program has continued to attract PHS students including Lathum Johnson and Leiah Kittams who participated in the 2021 survey as juniors and Rose Quitslund who was an alternate last year.

"It just has a reputation of being an awesome experience," Johnson said.

Though the trip to the glacier is intended to be an enjoyable experience, there is a heavy amount of preparation that goes into it.

Before students can join the program, they must write a letter of application and have taken geometry to apply and even if they get in, usually only seniors and juniors can make the trip out to the glacier.

To prepare for the survey the group meets during lunch on Wednesdays where they learn trigonometry and practice using a theodolite, a surveying instrument which measure angles using a telescope.

They train with the theodolite inside the school, and outside when the weather is nice, to practice plotting points and calculating distances which Thompson said helps prepare them for when they have to set it up on uneven surfaces near the glacier to make sure their measurements are accurate and can efficiently plot points.

"I kind of find it fun to tinker with the instrument," Kittams said. "There's a lot going on with them, but it's kind of fun to know once you really grasp everything that goes on with it."

There was no survey in 2020 due to the COVID-19 pandemic, but on May 18, 2021, Julian Cumps, Lydia Martin, Owen O'Brocta, Leesa Murph, Kittams, and Johnson were able to venture out to the glacier to conduct the survey two years in the making.

"He's the only helicopter that can land in the LeConte Glacier legally and so we have a special permit from the U.S. Forest Service to go in there and make a couple of landings," Thompson said.

"Usually the kids come back sunburned because he picks such nice days."

Murph, Cumps, and Kittams began the survey by setting up the theodolite over the southern marker and marking points on the glacier that they believed could be easily identifiable from the northern marker.

They recorded the angle measurements and then flew to the northern marker to help the crew there find the same points.

"The other team tries to match up and see those same points and from where we are, because the glacier is receding so much, sometimes it's hard to see," Thompson said.

The markers have been moved from their original locations since the program first began because of how far the glacier has receded, and during the survey some points plotted from the southern side of the glacier have to be scrapped if the ice from the glacier collapses into LeConte Bay before they are recorded on the northern side.

From those measurements they can calculate the distances of each point and determine how far the glacier has either receded or grown.

According to the survey map, the glacier appears to have come forward upwards of 60 feet in some places in 2021 from 2019 but it is unknown how last year's survey compares with the glacier's 2020 location.

"We've got a lot of temperature changes happening in the world right now," Thompson said. "What's pretty amazing is how far it's gone from 1983."

"That's kind of why the high school started the glacier survey team just because for a while it was really receding pretty rapidly," Johnson said.

"It's kind of plateaued out now but we're still just waiting to see if it starts again or just to see what it does."

The 2021 survey was also the first to use the electronic theodolites which Thompson said were donated to the program as opposed to the theodolites they had been using made in 1975.

"We took the risk and brought them up there with a couple of different batteries just in case we had power outages but that was a little bit different than years before," Thompson said.

Though not planned for this year's survey, the program is looking to work with the U.S. Forest Service to map the glacier using GPS and drone surveying in the future.

"I feel like with the surveying we're doing we're just scratching the surface," Johnson said. 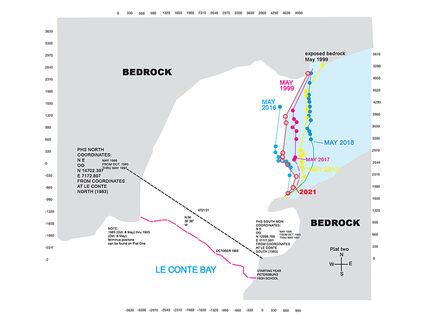 This map shows how the LeConte Glacier has moved in the last five surveys compared to where it was when the program began in 1983. It also displays the locations of the northern and southern markers used during the survey.

This year's students are currently reviewing the results of the 2021 survey which Johnson mapped using CAD software along with data from previous surveys and preparing for the 2022 survey.

Though the date is weather dependent, Thompson believes the survey will be performed around the second week in May.

"I'm just a rookie math teacher and sometimes I ask these guys for advice because they get so adept with the equipment, but it's just a great time," Thompson said.

"I've had a number of kids come back and say, the best day in high school was LeConte Glacier day and it's just a great escape, especially at that time of year for seniors."

"Like the seniors that encouraged me and Lathum to first apply in our sophomore year, it's definitely something to try out," Kittams said. "If you can submit an application and then you get accepted, definitely value it. It's something that you should go after if you can."