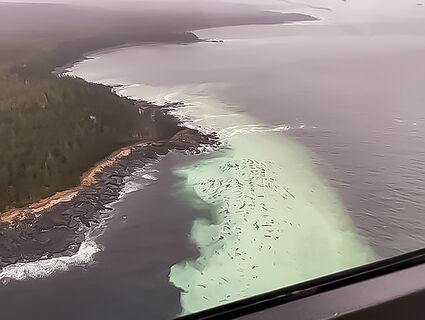 An aerial photo captures herring spawn and hundreds of Steller sea lions in the mix along the shoreline of Kruzof Island on April 5, 2021.

Vessels have been flocking to the Sitka Sound in preparation for the sac roe herring fishery which went on two hour notice Tuesday morning.

According to the Alaska Department of Fish and Game, no herring spawn have been observed during aerial surveys but the R/V Kestrel, which has been surveying the sound since Tuesday, has recorded sightings.

On Wednesday, the Kestrel spotted large biomasses northwest of Bieli Rocks, north of Middle Island, and southwest of the Siginaka Islands.