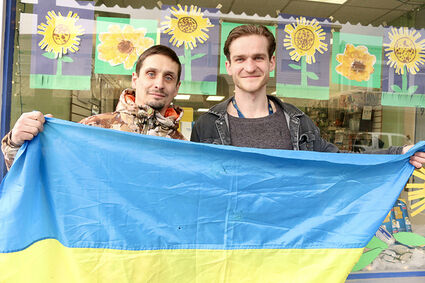 Serhii Dudnichenko, left, and Yevhen Koval hold their countries flag in front of the Pilot. They are two of the 26 Ukrainians currently in Petersburg working for OBI Seafoods.

When Russia invaded Ukraine last month, it didn't shock Serhii Dudnichenko, a proud Ukrainian. Dudnichenko, 40, knows all about Russia because he was born into the USSR. And he would hate to see his fellow Ukrainians go back to that way of life, because he remembers his parents being unable to buy food or basic necessities.

Dudnichenko and 25 other Ukrainians are working for OBI Seafoods in Petersburg this season. The war forced them all to make a tough choice: stay or leave?

"One part of me, want to go home and defend Ukraine, because it's my home," Dudnichenko says. "But another part of me, tell me that, 'Hey, guy, you should stay here and you should earn money to help your family, help your country.'"

He says, the history between Russia and Ukraine is very difficult and very long, and Russia has always thought of Ukraine as its little brother. In 2014 conflict between the nations heightened, the Maidan Revolution in Ukraine was followed by the Russian annexation of Crimea and the ongoing fighting in Donbas. And now, unfortunately, the invasion proves Russia isn't afraid of letting the world watch them go to war.

"It's like your neighbor come to your house and take something or somebody, your wife or maybe your relative, and go to the street and say, 'Now it's mine,'" Dudnichenko says. "It's impossible to have relationships like that and it's a disaster for Ukraine."

Speaking to his family every day, including his wife and daughter, and knowing they are safe in a village outside of a city helps. But lately, Russian planes have ramped up late-night bombing runs on that nearby city.

The financial support created by working for OBI, in Dudnichenko's mind, does more good than he could do if he were back in Ukraine. Extra money that doesn't go to his family, goes to friends that are fighting.

Dudnichenko concedes that Russian forces are in control of a couple smaller cities but says the Ukrainian people have come together and kept any large cities from falling, so far. This is important because Ukraine is known from within as a divided country.

"Most people in Ukraine say there is West Ukraine and East Ukraine, and it is two different parts and different people," Dudnichenko says. "But, for now, they all unite because it is our country."

People in the west are helping those looking to get away from the east. And no one is asking, or worried about, where the people needing help came from, because it doesn't matter.

Dudnichenko thinks of Ukraine as a beehive. When

the hive gets messed with by another animal, every bee gets involved.

Ukraine will win this fight, says Dudnichenko with certainty. No matter how long it takes. The country is unified now and so much of the world has rallied around the Ukrainian people.

Immediately upon arrival in Petersburg he noticed something was different about the people. Almost everyone here seemed to be smiling and they were happy to interact with him.

Dudnichenko says, small gestures like a community member, making eye contact and saying, "Hello. How are you today?" or "How can I help you?" to him, or any of the Ukrainian workers, goes a long way in terms of kindness.

Even if there is a language barrier, the actions expressed in the interactions are universal, he says.

After Russia invaded, Dudnichenko started seeing Ukrainian flags in the windows of businesses downtown. Then, last week, he and his fellow Ukrainians received gift bags filled with donated items collected from numerous local individuals and businesses.

The idea for the gift bags began because Cynthia Mathisen, of Lee's Clothing, wanted to give the Ukrainian workers some Smart Wool socks. She went on Tradio, once, asking for others to donate whatever they could, and almost immediately there was an outpouring of support from businesses and individuals in the community.

Mathisen had the honor of handing out the gift bags last week at the OBI cookhouse. She almost didn't do it, too shy, but afterwards she was glad she did.

It was before dinner and OBI mess hall manager Ben Johnson helped Mathisen by meeting workers at the door and directing them toward the table full of gift bags. Mathisen took over from there.

She felt like having a member of the community handing the bags out made a genuine difference. Mathisen says, it didn't take long for the workers to start taking pictures and coming up to her to shake hands or share a hug.

Mathisen is grateful for the memories she made that day because it showcased the strength of these Ukrainian visitors. Mathisen is especially thankful for Johnson's willingness to include her in the distribution process.

"Ben was such a good ambassador," she says. "It was amazing, seeing how he treats people with such respect."

This is Johnson's second year managing the mess hall for OBI, after taking over for longtime manager Kimmie Wilson. With around 60 workers to keep fed, Johnson and the two cooks he oversees, Rosa Figueroa and Jose Meza, do their best to maintain a variety of appetizing meals for all workers. So far, this season he's taken on three Ukrainian recipes.

"You're not going to always be able to replicate everybody's food, but you can try, and it seems like people appreciate it when you do," Johnson says. "I'd love to explore it more."

They made a honey babka dessert commonly referred to as, "honey grandmother." Olivier was also served, that's a Ukrainian twist on potato salad. And the cooks prepared borscht, a popular sour soup featuring beets as a main ingredient, which pleased Yevhen Koval and made him think of home.

He says, each region of Ukraine has its own peculiarities of borscht and over 50 official recipes exist. For instance, where he lives in the Odessa region, bell peppers are added. In central Ukraine, beans are added.

"But what I can't imagine is borscht without garlic," Koval writes in a message to the Pilot. "The OBI cooks do an excellent job of preparing borscht, the taste is like in Ukraine."

Koval was born and raised in Odessa, Ukraine's third largest city. In 2018, when he was in his mid-20s, Koval decided he wanted to draw people's attention to "the problem and the nonsense of the conflict between Russia and Ukraine."

He thought about something that connected all countries. The answer seemed simple: soil.

So, Koval began to travel, collecting soil from different cities, in different countries along the way.

"I went on a hitchhiking trip with $350 in my pocket, which lasted 38 days, and visited 15 countries," Koval writes. "On this journey, I learned how kind people can be. Everyone who met me on my way helped me. And it encouraged me not to stop."

One morning, after a long night crossing the border into Belarus, Koval came to a covered bus stop. Exhausted, he took out his sleeping bag and caught a couple hours of sleep on a bench. After waking, he encountered a man driving to work.

"He gave me his dinner, which his wife had prepared for him," Koval writes. "I was very ashamed and started to refuse, but he insisted, telling me not to worry about him."

Another memorable stranger was a janitor in Riga, Latvia's capital city. The man's name was Arkady. He'd noticed a small flag of Koval's hometown hanging on his backpack. And after talking for awhile, he offered Koval a place to freshen up, sleep and eat.

"When I went to his apartment, I was amazed at what I saw. Arkady turned out to be an artist," Koval writes. "His small apartment was filled with many paintings."

As Koval showered, the generous stranger peeled fruit and cooked rice porridge. These are just two of the many examples of kindness Koval experienced on his journey. Although he stayed in several cheap hotels, the majority of the time people invited him into their homes for the night. 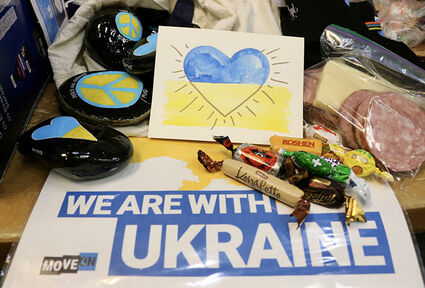 A dozen contributors helped Lee's Clothing make sure the Ukrainian workers in town got a variety of snacks and presents in gift bags. The bags were delivered last week, and each one had the name of the worker on it, which made their eyes light up.

The kindness and humanity of strangers is reflected in the soil Koval gathered during that trip. And the "collected earth," as he refers to it, will be used as part of a sculpture. It's his way of creating a symbol that will represent world peace and friendship between nations. Soil from Anchorage, Seattle and Petersburg will be added to the project.

Koval had a difficult time deciding whether or not to leave Alaska to defend his home and Motherland, same as Dudnichenko. But they stayed because they have an opportunity to make money and financially support loved ones back home. All of whom, Koval says, have lost their jobs, as a result of the invasion.

Both men were pleased to see Ukrainian flags downtown and grateful for the gift bags. Koval says, he misses the atmosphere of his hometown city so he enjoyed the fact the bags included Ukrainian candies and Ukrainian sausage.

For Dudnichenko, seeing the handmade card with his country's flag in the shape of a heart in his gift bag, really got to him. He covered his chest with both hands as he recounted the warm feelings it created.

"You know that people think about you and they want to say, 'You are welcome here,'" Dudnichenko says. "It's perfect."