SEARHC CEO speaks to hospital board 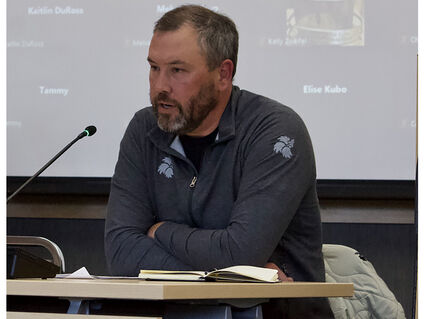 The Petersburg Medical Center hospital board hosted Southeast Alaska Regional Health Consortium CEO Charles Clement at its meeting on March 24 to give the public an opportunity to hear from him about SEARHC's current plans and opportunities for collaborations between the two entities.

The assembly chamber was packed during the meeting and even more people logged in on Zoom to hear Clement answer questions sent by board members and hospital staff regarding the future of health care in Petersburg.

Since talks of the need for a new medical facility began, members of the community have discussed what that future could look like and have included a merger with SEARHC in the conversation as a potential solution.

PMC has had multiple interactions with SEARHC leadership over the past year to discuss health care in the community but this was the first opportunity for members of the public to hear from SEARHC directly since SEARHC Senior Vice President and Chief Medical Officer Dr. Elliot J. Bruhl gave a presentation at a Petersburg Borough Assembly meeting last year at the request of Mayor Mark Jensen.

Members of the public were unable to ask Clement questions directly but they could speak during visitor comments at the beginning of the meeting.

Some spoke in support of maintaining local control of the hospital including PMC staff such as Chief Nursing Officer Jennifer Bryner who said the hospital's current organizational structure keeps jobs local and allows the hospital to be "innovative, efficient, and most importantly patient-centered."

Dr. Mark Tuccillo added, "I am all for collaboration with anybody that's willing to collaborate with us, what I'm not in favor of is having our power usurped and/or be consumed by another entity which is gonna take away our ability to do all of the things that [Bryner] just said."

Some in attendance were in support of SEARHC including Barbara Erickson, the president of the Alaska Native Sisterhood Camp 16, who spoke in support of collaborative opportunities.

"I know that there's been a lot of discussion and I see the points on both sides but I'd also like to take into consideration the cost it takes to set up appointments, to have our people go outside the community to the other hospitals," Erickson said.

"That's costing the state and SEARHC a heck of a lot of money and we don't have all the facility here that we need to serve everybody all the time."

Following visitor comments, Board President Jerod Cook said the board invited SEARHC leadership to the meeting to start a dialogue about the possibility of cooperation and to answer some of the public's questions about the future of health care in Petersburg.

Clement began his presentation with an introduction to SEARHC including its history, details on leadership and operations, and previous mergers and affiliations with local health care providers.

He said one focus of SEARHC is the construction of a new $300 million hospital in Sitka to replace the 70-year-old Mt. Edgecumbe along with the recently completed Wrangell Medical Center and could relate to Petersburg's need for a new facility.

"What I do know about Petersburg is there's a lot of anxiety about replacing the existing hospital that you have because it is aging out and I share that anxiety with you," Clement said.

"We are running a hospital that is 70 plus years old and it's hard to deliver state of the art health care, the highest possible quality health care in some of these environments that are just very physically and practically challenged.

He also discussed SEARHC's strategic plan for 2022-2024, which includes goals for growth and building on current partnerships while evaluating other opportunities.

He believed that there were many assumptions and "a lot of cart before the horse feelings" about what SEARHC's plan is and said most of what they do is open to the public.

"I think there are various avenues and various sort of categories of assumptions on what SEARHC is doing and what SEARHC may want to do in Petersburg but the very clear reality to that is I speak for SEARHC, I spoke to [PMC CEO Phil Hofstetter] today for the first time in probably over 10 years and we have not talked about any of the things that people are talking about here. We have talked about is there an ability to work together, to do something together," Clement said.

He added that the two entities are neighbors and SEARHC is open to helping and having conversations but that it is difficult to have constructive conversations if conclusions have already been drawn.

"...We work with various folks in various degrees, you know, from people like ANTHC and Swedish to people like Wrangell Medical Center and some is very elaborate, some is very straightforward, but those partnerships have to work for all parties and they have to be willing parties for them to work constructively," Clement said.

The presentation also included a slide on past affiliations and mergers between SEARHC and local health care providers which he said mostly came as a result of organizations running out of options.

"When a business is getting ready to shut down, when they've hit the wall, when the owner wants to retire, when a grant goes away and a service is needed in a community, if you look at most of our affiliations, that's where most of these things come into play," Clement said.

He said that is "an unfortunate time for people to come together" but recognized that Petersburg is not at that point.

Following the presentation, Clement answered questions posed by the hospital board and staff.

When asked about if SEARHC was willing to collaborate with the long-term goal of absorbing PMC, Clement said it would be a conversation but that their ambition is to ensure beneficiaries and the community have the same rights to health care as any other community.

He also discussed what levels of services are provided with the arrival of SEARHC into a community and that it varies from place to place.

"Our sort of approach has been to maintain at least an existing level of service and then oftentimes there's a commitment to enhance those levels of service," Clement said.

He was also asked about SEARHC's vision for the future of Petersburg's health care services which he said would be hard to say without having more conversations with the community.

Additionally, he was asked how SEARHC's prior mergers and affiliations have affected jobs at the facilities and he discussed how SEARCH leverages their economy of scale.

He gave the recent example of the Wrangell Medical Center in which SEARHC already had information technology, human resources and finance departments but that more medical staff was brought into the facility.

Board Member Kathi Riemer thanked Clement for attending the meeting and for giving the board and the public an insight into SEARHC's goals and Hofstetter added that he supported the idea of mutually beneficial opportunities.

Cook closed the meeting by saying that he is looking forward to continuing conversations.

The next hospital board meeting will be held on April 28.