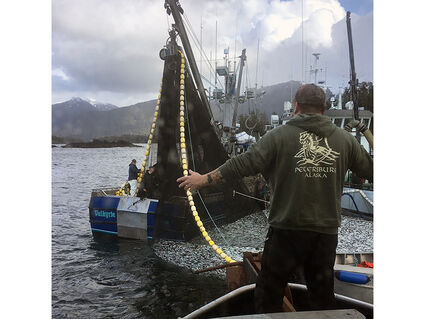 Tenders contracted to OBI pump a 300 ton set of herring from the Valkyries seine net in Sitka on Tuesday.

The Alaska Department of Fish and Game announced Tuesday that the sac roe herring fishery in the Sitka Sound will continue with daily openings from 8 a.m. to 6 p.m. in waters off the western shore of Baranof Island to the south of Sitka until closed by a field or advisory announcement.

As of Tuesday, an estimated 19,400 tons of herring have been harvested so far which is still less than half of the record 45,164 guideline harvest level.

The openings on last Thursday through Saturday occurred in the waters between Kruzof Island and Krestof Island, encompassing the Magoun Islands with slight...