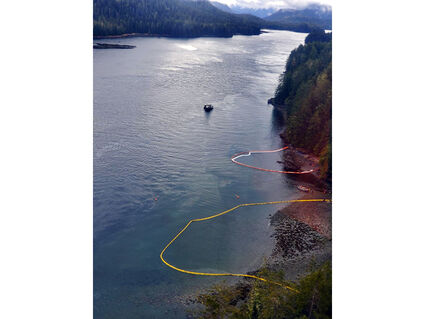 A containment boom was deployed at the site of the grounding, seen here on March 31.

The unified command of the U.S. Coast Guard, Alaska Department of Environmental Conservation and Western Towboat continues to lead the response efforts to the grounding of the tugboat Western Mariner which ran aground in the Neva Strait on March 21.

According to the Alaska Department of Environmental Conservation, the incident occurred at 2:55 a.m. on March 21 when a temporary steering failure onboard the tugboat caused the 286-foot freight barge Chichagof Provider in tow to collide with the Western Mariner, pushing the tugboat onto the beach and causing a diesel spill.