Bystanders jump into action to put out boat fire 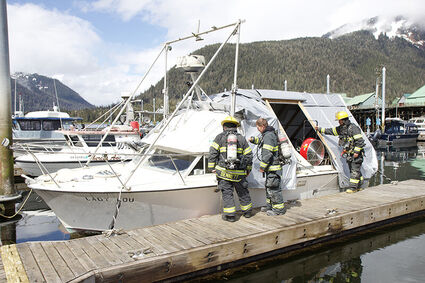 Firefighters use a positive pressure ventilation fan to clear smoke from the interior of the Lady Lou after the fire was put out.

The Petersburg Volunteer Fire Department responded to a fire in Middle Harbor on Monday after smoke was spotted coming from a docked boat.

The fire was on the Lady Lou, owned by Terry Slafter, and came from the oil stove on board, according to Assistant Fire Chief Dave Berg.

Berg said the stove may have had an installation problem that was a result of age and use and it appeared to have fallen down on one side.

The area underneath and surrounding the stove was charred.

According to Berg, it appeared that Slafter, who lives aboard the boat, woke up to smoke in the cabin.