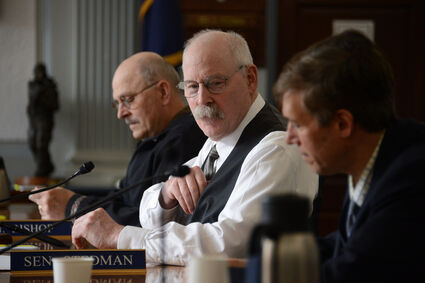 Sen. Bert Stedman, R-Sitka, presides over a meeting of the Alaska Legislature's budget conference committee on Sunday, May 15, 2022, at the Alaska State Capitol in Juneau, Alaska.

Three minutes before 11 p.m. on the last day of its regular session, the Alaska Legislature finalized a state budget that will pay each

eligible Alaskan about $3,200 later this year.

As late as Saturday, it appeared possible that the House and Senate would agree on a $5,500 payment, but lawmakers settled on a lower amount after days of negotiations and a failed vote to spend from savings.

"For the four years I've been down here, we've practiced fiscal restraint and tried to keep money in savings, make sure we put Alaska's future on the front foot, and that's where my vote came from today," said Rep. Grier Hopkins, D-Fairbanks, who cast the decisive vote against spending from savings to increase the payment from $3,200 to roughly $3,850.

House Minority Leader Cathy Tilton, R-Wasilla, was among those who supported a larger payout and said she was disappointed by the result.

"Alaskans are the ones who lose out," she said.

Speaker of the House Louise Stutes, R-Kodiak, refused to answer questions from reporters after the conclusion of the session, instead attending a gift-giving ceremony and celebration for staff.

The $3,200 payout is expected to cost $2.1 billion and is the largest component of a budget that also pays for services and construction projects from July 1 this year through June 30, 2023.

Budget among largest in Alaska history

Alaska is expecting a surge in oil revenue due to the Russian invasion of Ukraine, and the Legislature spent most of that surge, boosting the share of the budget funded by taxes and Permanent Fund transfers to $8.4 billion. That's the 10th-largest in state history, when adjusted for inflation.

Add fee-funded and federally funded programs, and the budget is $16.2 billion, the second-largest in state history.

Gov. Mike Dunleavy may veto some projects from the budget in the coming days, which could lower the total, and the figure could rise next spring during the Legislature's annual supplemental budget process.

The Senate approved a $5,500 payout, but the House rejected the Senate's plan on Saturday, requiring negotiators to come up with a compromise. They settled on a budget paying $3,850 per recipient, with $2,600 coming from the Permanent Fund dividend and $1,250 from the energy relief payment.

Half of the energy payment was to be paid with $420 million from the Constitutional Budget Reserve, but spending from the reserve requires 15 votes in the Senate and 30 in the House. The Senate met the mark, and Dunleavy urged House members to agree, but the House fell one vote short as savings-minded Democrats and independents voted against it.

All of the House's Republicans, plus 10 members of the predominantly Democratic coalition majority, voted for spending from the reserve.

Despite the failed vote, the $3,200 payment - the exact amount will depend on the number of PFD recipients this year - will be the second-largest in state history when adjusted for inflation.

"This is a give and take. We give, sometimes we have to take," said Sen. Bert Stedman, R-Sitka.

Members cite energy costs in arguing for higher payout Rep. Mike Cronk, R-Tok, urged members of the House to vote in favor of the budget and a larger energy payment, saying he's received many messages from constituents worried about rising energy prices.

"Times are tough. People are in a dire position, so if we can do anything to help them this year, I think that's the appropriate thing to do," he said.

But about half of the House's governing coalition felt differently, voting in favor of keeping money in savings instead.

After the House vote, Senators who supported the bigger payout tabled a key election-reform and campaign-finance bill supported by lawmakers who voted against spending from savings.

Pressure tactic or not, holding the bill failed to change the result: A revote ended with a wider margin against the $3,850 payout.

The campaign finance bill died when the session ended, which means candidates in this year's election may accept unlimited amounts of campaign contributions.

Budget not the only bill passed at session's end The House and Senate passed many other bills in the last hours of the legislative session, including an education reform bill, a major revision to state law dealing with sexual assault, new restrictions on child marriage and reliable funding for the state's college scholarship program for high school students.

"I think the only failure was about politics, and it wasn't about policy," he said.