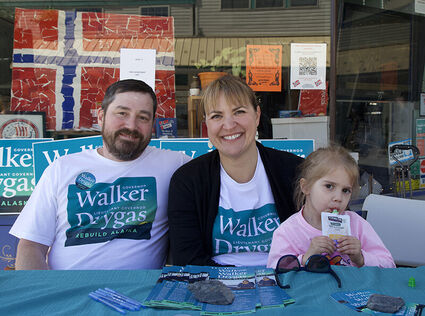 Heidi Drygas, her husband Kevin Sund, and daughter Olive sit behind at their booth during the Little Norway Festival.

Heidi Drygas, the former commissioner of the Alaska Department of Labor and Workforce Development, visited Petersburg as part of her campaign for lieutenant governor during the Little Norway Festival in late May.

Drygas is running with independent Bill Walker who served as Alaska's governor from 2014 to 2018 against incumbent Gov. Mike Dunleavy in this year's election.

The trip marked her first visit to Petersburg and during her time in town she set up a booth to talk to members of the community about their needs, met with PIA Tribal Administrator Chad Wright, marched in the parade, and att...