Assembly and Hospital Board discuss potential sites for new building 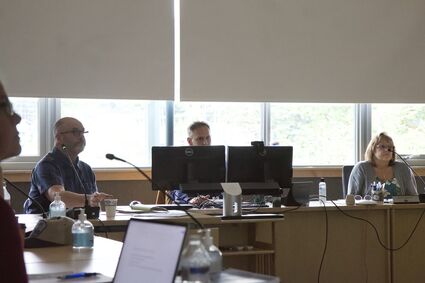 The Petersburg Borough Assembly and Petersburg Medical Center Hospital Board met in the assembly chambers Tuesday afternoon for a joint work session to discuss potential sites for a new hospital building.

During the meeting, PMC CEO Phil Hofstetter gave an update on the progress made toward planning and construction of a new building and what the project's next steps are.

The assembly and hospital board have both previously agreed on the need for a new facility and passed resolutions in the last year in support of the project.

PMC has faced issues with its current building as they are unable to do remodeling work to upgrade the facility's equipment because of the building's infrastructure and require more space to serve patients and staff.

According to Hofstetter, PMC has narrowed down the sites proposed to them by the borough to two preferred locations-North Haugen and Excel.

The sites and locations, however, are not yet finalized and will need to have geotechnical work done to determine if they are buildable.

PMC received permits to conduct an environmental study on the sites last year and will be using part of the $8 million in appropriations made by Sen. Lisa Murkowski for that process.

Hofstetter believes they could get the results of the geotechnical work by the end of the summer, after which they will reconvene with the assembly to review the results and make a determination.

Assembly Member Jeff Meucci expressed some concern that the proposed Excel site would encroach on the proposed expansion of the Airport Subdivision which the assembly approved $7,200 to design at its last meeting.

Assembly Member Bob Lynn later said the hospital and the borough could collaborate to make sure they are not doing the same work on the same land.

Hofstetter said, "I think there's also an opportunity to have those two paths converge where we're building infrastructure, the hospital's infrastructure using utilities and also housing is part of that development and it might be an opportunity as well. If we can work together on some of that stuff so it's not a waste of money that would be a possibility as well and so that way if we can develop things with common ground and we're all working towards the same goal I think that's potentially an opportunity on that"

He added that a benefit of the preferred sites is their proximity to Mountain View Manor in helping establish a "continuity of care" along with expanding water, sewer, and electric utilities and creating a safe traffic pattern when designing the road.

Along with discussions between the hospital and the borough, the site selection process will also go through Planning and Zoning.

"I think that there's some concern in the community where, you know, making decisions without public input is a concern and this actually follows really good process so that if we do this site, if it looks like it's a good location...from the Planning and Zoning we have a natural process of public input and public comment," Hofstetter said.

According to the presentation, the estimated full budget for the project based on a two-story building would be just over $84 million though Hofstetter said until they get architectural designs and gather more information from environmental work on the sites there will not be an entirely accurate estimation.

So far the hospital has received $8 million in federal appropriations and is expecting $20 million included in the state budget while continuing to seek other grant funding opportunities and work on a funding plan.

PMC is taking a phased approach to the project and is completing portions as funding becomes available.

There was also some discussion about what would happen to the old facility and Hofstetter reported that the structural engineer recommended demolition and the site would then be turned over to the borough.

SEARHC was also discussed at the meeting and Hofstetter said he opened a conversation with their leadership about potentially having a SEARHC building on the same campus as the new hospital where SEARHC could house some of their additional services that are already in town.

Though Hofstetter has not heard one way or the other on the possibility of that happening, he called it "great opportunity for collaboration."

The results of the Community Needs Assessment conducted in 2021 were also reviewed during the meeting.

The assessment surveyed 189 community members along with 36 key stakeholders and identified support for maintaining a community run hospital and support for a new building.