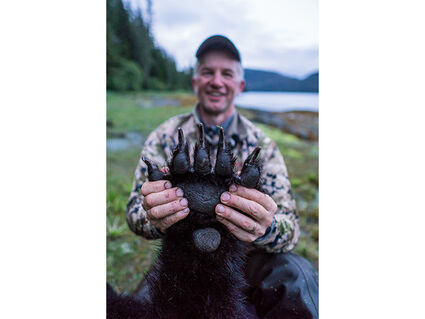 Randy Newberg holds the paw of a boar he tagged on a successful hunt in 2018. He's taken a lot of bear meat back home to Montana from Southeast over the years.

Hunting guide Logan Canton has been working all over the state since 2008, including conducting black bear hunts in Southeast. He says, one of the biggest changes he's seen locally is an increase in nonresident hunters coming here to hunt bear, and the 2021-2022 season that just wrapped up on June 30 was no exception.

For years, good genetics on Prince of Wales Island produced a reputation for black bears with big skulls. That, combined with the infrastructure, road system and an array of protected bays and inlets accessible by boat attracted nonresident hunters. But these days, more and m...