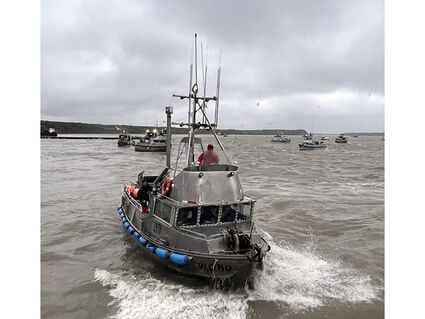 For Alaska salmon fishing, the summer of 2022 is the best of times and the worst of times.

In the Bristol Bay region, the sockeye salmon run and harvest amounts set new records, as was predicted in the preseason forecast. As of Monday, the run had totaled over 73.7 million, with a harvest of over 56.3 million. The previous record was set just last year, with a 67.7 million run of sockeyes and a third-biggest-ever harvest of nearly 42 million of the fish.

But along the Yukon River, a prized salmon run is heading toward a worst-ever season.

The number of Chinook counted by sonar while swimming up the river at Pilot Station, a village near the Bering Sea coast, was the lowest on record for this time of the year, the department said. Things are looking grim for the rest of the summer, Fish and Game said in its most recent update; "the drainage-wide run may be under 50,000 fish, which is so small that escapement goals may not be met in any tributaries," the update said. Chinook fishing has been closed all along the river and its drainages.

The chum salmon run, which starts in the late summer, is also looking grim and "is anticipated to be critically low," meaning that even subsistence harvests will be closed for at least the start of the fall season, the department said.

Fisheries activists are pointing to both cases as evidence supporting protective measures, for which they are campaigning.

Opponents of the controversial Pebble Mine say two consecutive years of record sockeye runs demonstrate the value of protecting the Bristol Bay watershed, site of the world's biggest sockeye runs, from that proposed development. They are urging the Environmental Protection Agency to invoke a rarely used provision of the Clean Water Act to preclude any wetlands-fill permit for the mine.

"Salmon have provided for the people of Bristol Bay for thousands of years due to our ancestral stewardship of our pristine lands and waters. We're grateful our salmon continue to return home in record numbers but our watershed is still facing the grave threat of mines like Pebble. Bristol Bay remains a salmon stronghold and will only continue if it is permanently protected. The EPA must finalize Clean Water Act protections for the headwaters of our fishery this year," United Tribes of Bristol Bay executive director Alannah Hurley said in a statement.

Advocates for Indigenous communities dependent on Yukon River salmon, meanwhile, say the continued poor returns there and in the Kuskokwim River demonstrate the need for action to reduce cases of ocean bycatch, the accidental harvest of Western Alaska-bound salmon in nets used to harvest other species.

Several groups have requested a meeting with Gov. Mike Dunleavy to discuss the run failures in the Arctic-Yukon-Kuskokwim regions. Such a meeting had not yet been scheduled as of Monday, said Serena Fitka, executive director of the Yukon River Drainage Fisheries Association, one of the 16 groups making that request. And so far, the North Pacific Fishery Management Council has not put stricter bycatch rules in place, she noted. "In a crisis, we cannot wait for more research to be done," she said by email.

Farther north in western Alaska, salmon fishing is underway in the Norton Sound and Kotzebue regions, according to the Department of Fish and Game.

In Norton Sound, the harvest to date has been dominated by pink salmon, a species becoming more plentiful in recent years in farther-north waters. Of the more than 93,500 salmon harvested as of mid-July, about 81 percent were pinks, according to the department figures.

Alaskabeacon.com is part of States Newsroom, a network of news bureaus supported by grants and a coalition of donors as a 501c(3) public charity.