Did a wild wolf breed with a domestic dog? 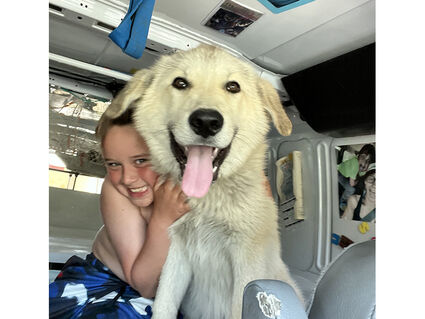 Archie Dunbar, 7, smiles with puppy Biscuit, one of at least nine dogs born in Haines this spring that the state suspects could be part wolf. The owner of the litter's mother said she might have inadvertently mated with a gray wolf in a rural part of the borough. Wolfdogs are illegal to breed or possess in Alaska.

HAINES-Not every day does a wild wolf mate with a domestic dog.

But a handful of local puppies born in February might be the product of such an occurrence, which biologists say is rare but not impossible.

The Alaska Department of Fish and Game (ADFG) is investigating at least nine pups born at 35 Mile Haines Highway that might be wolfdogs, which are illegal to breed or possess in Alaska.

"Somebody contacted me and said they were under the impression there were some dogs running loose in an area where wolf activity was heard," said ADFG wildlife biologist Carl Koch.