'Test yourself and you'll eventually make it' 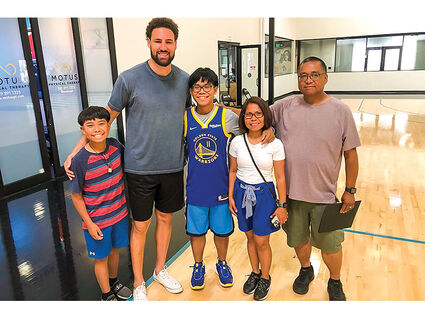 Over the years, Thompson has had obstacles of his own to overcome, with rehabilitating from back-to-back injuries, and watching Thompson persevere is something Joseph said helped him find strength to fight through his personal journey. "It was really an inspiration to me how he was able to climb his way back to playing full time and starting in games, I had to climb my way back in my own way, too, so I could somewhat kind of relate." Joseph and Thompson spent the first part of their visit shooting hoops and talking shop, with Thompson not only offering life advice that's served him well, but also a few tricks of the trade he's learned along the way. Thompson also gifted Joseph with an assortment of Warriors gear and several signed jerseys, along with one of Thompson's personal cherished pieces of memorabilia: an autographed photo of the late Kobe Bryant, a gift that Joseph said was nearly too precious to accept. "I wasn't sure if I should take it at first. If anything it should probably be put in a vault because it's so valuable, but I'm pretty sure we're going to be framing it and keeping it somewhere that we know it'll be safe." Though the autographed photo was appreciated and of great value, Joseph said the most valuable gift Thompson gave him was his advice. "He said from his own experience he had to climb little by little to get back into the game, he said life's about facing things you might not want to face but that it all adds up in the long run," Joseph said. Joseph Tagaban and his family met with Klay Thompson of the Golden State Warriors after his wish was granted by the Make-A-Wish Foundation. From left to right: Jacob Tagaban, Klay Thompson, Joseph Tagaban, Je Tagaban, and Ed Tagaban.

Words of advice have been running through Joseph Tagaban's mind ever since meeting his NBA idol Klay Thompson of the Golden State Warriors.

The advice takes on new meaning since Tagaban recently found out that his fight with cancer is not over as was previously thought.

What started as a routine checkup in Seattle last week eventually revealed that he had a relapse of leukemia after it was detected in his bone marrow.

"We are back to square one and this is gonna be a long haul," said Je Tagaban, Joseph's mother.

Two weeks ago, Joseph was able to make his dream come true through the Make-A-Wish Foundation when he got to meet Thompson, their meeting was even featured on ESPN's "My Wish" series.

However, the high has been chased by a challenging development.

"It got to me yesterday but as of now I'm feeling a little better. It's crazy how things can turn in such a short period of time because I was just feeling fine and now, I have to be admitted back into the hospital," Joseph said last week after the checkup.

"It just really shows me how precious time is. If anything, I should have been hanging out with my friends much more than I have been."

In 2020, Joseph was diagnosed with acute myeloid leukemia, also known as AML, after a lump underneath his tooth was discovered.

He was then checked into the Seattle Children's Hospital where he spent nearly a year undergoing several rounds of chemotherapy.

Joseph had eventually reached a point where doctors were feeling confident enough to end treatments, though he was still traveling to Seattle for checkups so the doctors could determine the cause of his low platelet counts.

"The blood count wasn't showing great numbers, and the platelets were down, so we knew something was up but then he felt good, a little tired but overall seemed to be feeling better. I just didn't want to go in the direction of believing it was coming back," Ed Tagaban, Joseph's father, said last week.

"We just got off of a big high from the Make-A-Wish deal and we were just still riding that wave until yesterday came and then it all came crashing down around us."

Ed said on Tuesday that they were able to catch it early because there was no leukemia showing in his blood work.

Joseph began his chemotherapy treatments, which aim to destroy the cancer cells in his bone marrow, Wednesday morning.

They are hoping that he will only need one round of chemotherapy but it may take another round before the cancer goes back into remission.

Following the treatment and once his platelet counts are back up, Je said he will do another bone marrow test to see if there is the cancer is still present but if there is no evidence of disease they will consider proceeding to a bone marrow transplant.

She added that Joseph does not currently have an exact match for the transplant and they are not sure how long it could take to find one.

There are some other options they could pursue including doing a cord blood transplant but they hope to find a good bone marrow match.

If he does receive a bone marrow transplant, there is also the risk of graft-versus-host disease where host cells may attack donor cells and he would need anti-rejection medication.

With the treatments and recovery times, Ed said they could be looking at 15 months in Seattle.

"He cannot be in school for his sophomore year, which is pretty, pretty sad, but we'll make it work," Je said.

Je added that because of how long they may have to stay in Seattle, they might eventually have to look for an apartment there depending on the limits of their housing assistance.

They also have accounts set up so people can donate money through the Joseph Tagaban Donation Account with Wells Fargo and First Bank and are asking local businesses to hang up Joseph Strong posters and information for donations.

The Tagabans are also encouraging people to register at BeTheMatch.org and join the match registry to see if they could become bone marrow donors.

As they go into this next round of treatment, Je again thanked Petersburg for the support the community has shown and asked for continued prayers.

"Even like the last minute that he had his wish come true reveal and people just, you know, they didn't hesitate to show up. They went full force," she said.