Artifacts returned by Portland museum belong to the entire clan 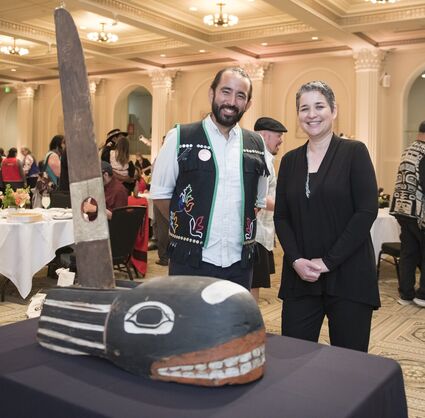 Michael Hoyt and Kathleen Ash-Milby, curator of Native American Art, stand beside the killerwhale hat at a Portland Art Museum event in May recognizing the repatriation of Wrangell Tlingit objects held in the museum's collections.

WRANGELL - Twenty years ago, the Central Council of Tlingit & Haida Indian Tribes asked the Portland Art Museum to return nine objects that were taken from the Naanya.aayí clan in Wrangell almost 100 years ago.

Among them are a mudshark hat and shirt, killer whale stranded on a rock robe, killer whale hat, killer whale with a hole wooden fin, killer whale flotilla Chilkat robe, two mudshark shirts, and a headdress the clan says was captured from the Tsimshian during a battle near the mouth of the Stikine River, according to a federal register listing announcing that the museum intended...