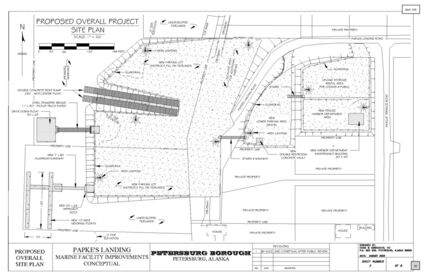 This conceptual drawing of the Papke's Landing Marine Facility is a revision of the design completed earlier this year by Harai & Associates.

The Petersburg Borough Assembly approved the second version of the conceptual plans for improvements to the Papke's Landing Marine Facility after a 5-1 vote during last week's meeting.

plans are a revision of the plans released in March and increase the total project cost from $6.41 million to $9.22 million.

The revision was crafted by Alan Murph from Harai & Associates with input from Assembly Members Dave Kensinger and Bob Lynn who took comments and suggestions submitted by the public regarding the original conceptual plans into consideration.

One major change from...