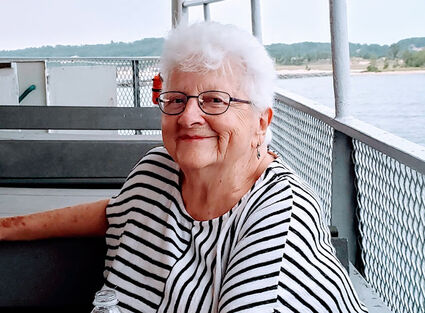 Marilyn Mae Prus was born in Grand Rapids Michigan on August 19, 1936 to Erwin and Birtha Dressle. On September 9, 2022 she was met at the bridge by her spiritual teacher and he walked her the rest of the way to heaven.

In 1954 Marilyn married Donald Prus in Massachusetts and they were honored that nine souls allowed them to bring them into this world. She prayed that she inspired these souls and others to love life and the God who gave it to them.

Marilyn pursued an education after raising her family, and received her associates degree in Psychology. She was passionate about mental and women's health and was a counselor and volunteer for many years.

She was a loving and kind mother, grandmother and friend who had a true passion for life and family. Not only was Marilyn a fantastic mother to her own children, she was like a second mother to many of her children's friends. Her home was a revolving door and everyone was always welcome, especially for dinner. She was an amazing cook and will be remembered for many specialties, but especially for her delicious perogies. Marilyn enjoyed a good party, a good meal, music, and reading. She loved to play games, cards, puzzles, and to spend time with people. She had a passion for traveling and she loved being Don's co-pilot on the open road. In her sixties, Marilyn spent 10 years living above Lee's Clothing in Petersburg, Alaska, which she very much loved.

Marilyn was an inspiration to many because of her commitment to spiritual growth and enlightenment through daily meditation, a practice that carried her through life's challenges.

Preceding her in death are her parents Erwin and Bertha Dressler; her son Patrick Prus; sister Connie Kupris-Meyers; and two brothers Ted and Ron Dressler.

Marilyn will truly be missed by all who loved her and by those she touched.

Donations in Marilyn's memory can be made to Unity of Grand Rapids, Michigan or Blue Mountain Center of Meditation, Tomales, California.