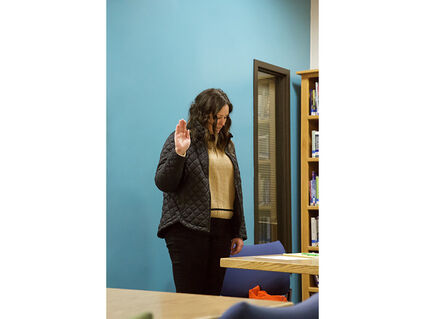 New board member Niccole Olsen takes the oath of office during the Petersburg School Board meeting Tuesday evening.

The results of this year's municipal election were certified by the Petersburg Borough Assembly at a special meeting last Friday.

Three ballots-two of which had been postmarked by election day and received by the borough and one questioned ballot-were counted during the meeting which brought the total number of ballots cast to 1,194.

After the ballots were counted, the assembly voted 5-0 to certify the election with Mayor Mark Jensen and Vice Mayor Jeigh Stanton Gregor excused.