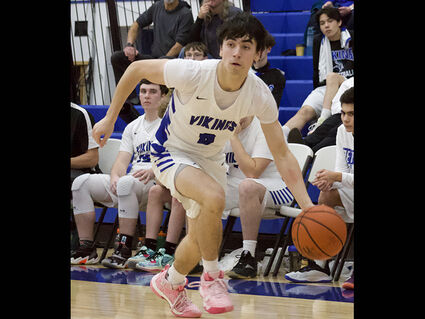 Kieran Cabral dribbles along the sideline.

The Petersburg High School boys basketball team went toe-to-toe with one of the top teams in the state in the Metlakatla Chiefs last weekend, winning one of two in their first games of the season.

"Either home or away, anytime you can get a split in our league against a really good team it's a good weekend," Head Coach Rick Brock said.

The Vikings took Friday night's game 41-38 after some late drama with Jack Engell, Rik Cumps, and Kieran Cabral all scoring in the double digits.

The lead was within a single possession for most of the game with Petersburg trailing at the end of each of the f...