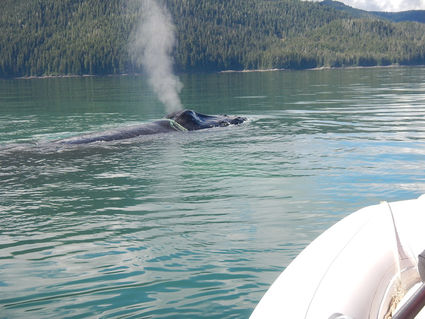 Remnants of a gill net wrapped around a humpback whale in Frederick Sound on Friday.

An entangled humpback whale continues to remain snared in a gill net despite a two day effort last weekend to free the animal.

Don Holmes with the Marine Mammal Center in Petersburg received a call Friday morning about the snared whale in Frederick Sound. He and other volunteers were granted permission from the National Oceanic Atmospheric Association to assess the situation.

“We found that the whale was completely wrapped on the flukes with the lead line draping across the back of the animal,” Holmes said.

Holmes and the others decided something needed to be done rather than standby.

Holmes said the whale was still active because it had only recently been tangled and was pulling the boat by the net it was snagged on. After several hours of attempting to free the animal from the net without success, the team, along with the boat captain, cut the net free.

“We worked with it for awhile and put buoys on the trailing pieces of the net and a transponder that gives a GPS signal so we could find the whale later,” Holmes said.

He estimates there are five to ten fathoms of gear still attached to the whale’s tail. The team stayed with the animal until around 5 p.m. before heading back to Petersburg. The following Sunday they tracked the transponder and found the humpback near Cape Fanshaw.

Holmes said the whale had moved roughly 20 miles from where they had engaged it last. Weather conditions made it difficult to approach the whale and nothing more could have been done.

“The whale is doing okay in terms of breathing,” Holmes said. “It’s not able to swim well. It’s using its pectorals rather than its flukes to swim with. It’s not lifting its tail out of the water.”

“It’s basically like a marathon swimmer crossing the English Channel with only the use of their arms,” said Barry Bracken, president of Petersburg’s Marine Mammal Center.

Bracken was one of the responders to the incident. He said the Petersburg team had a teleconference with the North Pacific Large Whale Entanglement Response Network, a group of other response teams. Members in Juneau are planning to encounter the whale today.

“It did continue up Steven’s Passage. They’ve asked not to divulge the exact location so as not to attract a lot of attention,” said Bracken.

Bracken stressed the importance of the communication between response teams in dealing with these kinds of situations and how smoothly it is working in the current one.

“Even though we were not able to remove all the gillnet, this network has worked flawlessly,” Bracken said. “We put a tracking buoy on it, then we were able to do a follow up the next day and we were able to track it to its new location so the other team can locate it.”