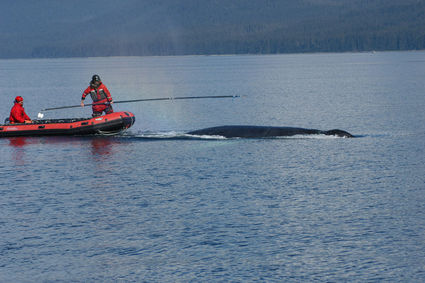 Responders out of Juneau were able to free a portion of gear off the humpback whale that was entangled in a gill net August 23 in Frederick Sound. Petersburg volunteers were the first to reach the snared whale but were unsuccessful in removing the net. They did manage to attach a satellite buoy to track the humpback, helping the Petersburg team and other officials including those from National Oceanic Atmospheric Administration monitor the animal as it moved north towards Juneau.

NOAA fisheries and the Alaska Whale foundation made several attempts to remove the gear. Last Thursday in Chatham Strait, a NOAA press release states, teams were able to remove several fathoms of gear.

“The tail and pectoral fins are free of gear, but the necklace of line behind the blowhole remains,” said Fred Sharpe of the Alaska Whale Foundation, a partner in NOAA Fisheries Alaska Marine Mammal Stranding Network. “We have removed the satellite telemetry buoy.”

Officials hope the animal will be able to shed the estimated 30 fathoms of remaining gear on its own.

NOAA asks mariners not to engage the whale or make additional rescue attempts.